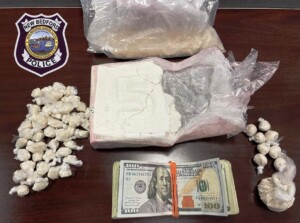 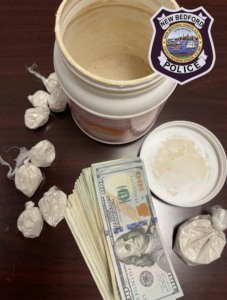 NEW BEDFORD, Massachusetts (WLNE) —
Top brass at the New Bedford Police Department says 2022 will go down in history as ‘one of the most prolific for drug and cash seizures. In 2022, detectives seized over 20 kilos of fentanyl and 2.5 kilos of cocaine, along with over $1.4 million in cash. The result of Friday night’s busts secured 2022 a place in the department’s history of illegal seizures.
New Bedford Police Chief Paul Oliveira said the most important part of these large drug busts is the number of lives saved by taking these drugs off the streets of New Bedford, “What we can’t measure, and what is most important, is the number of lives saved. We have already seen the effects that this epidemic of poison has had on our community. So many lives taken, so many families destroyed. I encourage the public to see these numbers in those terms to have a true appreciation of how valuable proactive police work is to our city.”
Friday night (12.30.22) the “Organized Crime Intelligence Bureau” executed a search warrant at a home on Phillips Avenue. Detectives found nearly 200 grams of fentanyl, packaging materials and $1,080 in cash. 22-year-old Manny Cardona Molina and his girlfriend, 21-year-old Sheila Guardado were taken into custody and charged with trafficking fentanyl in excess of 100 grams and conspiracy to violate the controlled substance laws.
Later Friday evening, detectives executed another search warrant, this time at an apartment on Sycamore Street. Officials found over 600 grams of cocaine, 50 grams of fentanyl, packaging materials, and $3,276 in cash. Detectives arrested Carlos Figueroa-Pizarro, 33, and Wilmarie Marchan-Pantojas, 31. Both were arrested and charged with trafficking cocaine in excess of 100 grams, trafficking fentanyl in excess of 36 grams and conspiracy to violate controlled substance laws.
Categories: News