NEW BEDFORD, Mass. (WLNE)- The New Bedford Police Department made the largest drug bust in the city’s history on Monday.

Police say that they found 7.2 kilograms of fentanyl during a search of multiple apartments at 2100 Phillips Rd. Police also found drug processing equipment and $2,440 in cash. 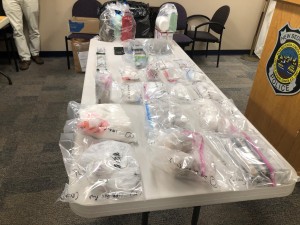 The tenant of those apartments, Ramon Emilio Genao, has been arrested and charged with trafficking fentanyl in 200 grams or more.

According to the U.S. Drug Enforcement Agency (DEA), 2 milligrams of fentanyl is deadly to humans.

There are 7.2 million milligrams in the 7.2 kilograms of fentanyl that police confiscated. That’s enough to kill 3.6 million people.

Police: Man hits Euro at Phoenix in Fairhaven for smash and grab

Patriots to host Giants to kick off pre-season Thursday