NORTH KINGSTOWN (WLNE) — Kristen Allen of North Kingstown wanted to donate a kidney to someone she knew who needed help. When she wasn’t a match for that recipient, she decided to move forward and donate to someone she didn’t even know.

“I was looking for myself I think to focus more on kindness, compassion, recognizing the humanity in each other again and I thought that this could be something that I could do,” Allen said.

That recipient, also a North Kingstown resident, went through 30 years of kidney disease. And today, because of Kristen, he is healthy again.

“Quite frankly I’m doing great,” Rich Nagle, the recipient of Kristen’s kidney, said, “this isn’t like borrowing 20 bucks from your brother-in-law, you know, they gave me a body part,” he added.

And Nagle’s brother-in-law wanted to donate his kidney to help Rich, but wasn’t a match. After hearing that, and knowing the need people have living with kidney disease, he wanted to donate to a stranger, too.

“Where I work, right next door is a kidney dialysis center, and I see the traffic going in and out of that dialysis center every day,” Michael Poirier said. 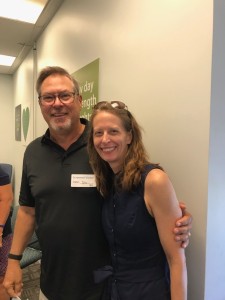 “The hospital helped arrange a lunch meeting with us and that was really nice,” Allen said.

“It was a wonderful thing, when I stood up to meet Kristen, it was something,” Nagle said.

The donors and recipient told ABC6 not many people know how difficult living through kidney disease is, and how easy it can be to see if you could be a match to donate.

“It came as a surprise to me that I didn’t know about it so I think with my experience in just donating blood and blood platelets, and not knowing about it, there’s probably a lot of people who don’t know about it,” Poirier said.

Wednesday evening at 6:45 p.m. Kristen Allen and Michael Poirier were honored for what they did at the North Kingstown town council meeting.

The group also plans on finding ways to reach out to the community and spread more awareness about the disease and how people can help.