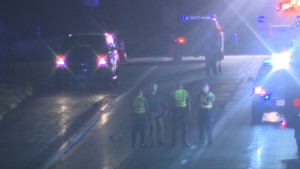 PROVIDENCE, R.I. (WLNE) – There’s been a spike in deadly automobile crashes on Rhode Island roads this year and as Halloween approaches there’s a warning about driving under the influence.

The Rhode Island Police Chief’s Association Thursday announced that there have been 45 deadly crashes on the state’s roads in 2020.  Last year there were 49 traffic crash fatalities.

This statistic does not include fatal pedestrian crashes.  There have been 16 pedestrian fatalities so far in 2020, which is double 2019’s total.

Officials say the pandemic is to blame because fewer people driving to work means less people on the roads, which also means drivers can go faster.

Also, in more than half of the crashes this year drivers weren’t wearing their seatbelts.

Halloween traditionally sees an increase in DUI and pedestrian crashes and law enforcement is urging anyone celebrating this weekend to drive sober.

Small businesses rally for support from the Governor

‘America is back’: Biden pushes past Trump era with nominees