The superintendent called it a system breakdown.

WARWICK, R.I. (WLNE) – A Warwick family is demanding answers from the school district after their 6-year-old son somehow made it outside his elementary school by himself.

“We could have lost our 6-year-old son,” said Susan Bedard.

Bedard says she found her first grader Luke walking down the street when she got to Lippitt Elementary School Wednesday afternoon.

She was picking both of her sons up early because her older son Timothy had a headache, and school Covid protocols required him to be sent home.

“When I turned onto the street that Lippitt was on, I’m like, ‘Whose kid is in the road? There’s this little kid standing on the road. Who is it? Who lets their kid just do this?’ As I get closer, I realize that it’s my kid,” recalled Bedard.

Bedard says she put Luke in the car and went into the school to inquire for both of her sons. No one in the main office seemed to know where Luke was. Bedard says she told them she found him on the street.

“‘Where is my child? Why was he outside alone?’ And no one knew,” she said. 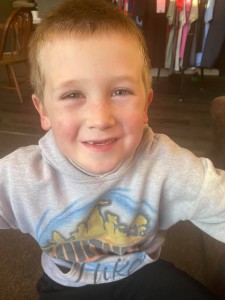 According to the district, when Luke was told his mother was there to pick him up, he somehow walked out the nearest door instead of to the front entrance, without an escort. The superintendent called it a system breakdown.

“How did my child get out of the school undetected, stay out there undetected for a period of time, and nobody knew?” questioned Luke’s father Tim Bedard.

“I could have went to pick up two kids and only left with one,” said Susan.

Here is the full statement from the superintendent Philip Thornton:

“Today the District investigated a situation at Lippitt Elementary School, where on February 3rd a student was released from the classroom to meet a parent for an early dismissal.  In a system breakdown, the student did not exit the building out the front door, but rather the student exited a door nearby the classroom.

The District takes full responsibility and has launched a thorough investigation into this matter. As part of this process all safety protocols and procedures are being reviewed with all staff members at all Warwick Schools.”

So far, the Bedards say they’ve been dissatisfied with the school’s response to the incident.

“The protocol obviously needs to be changed. It’s not a fail safe system,” said Tim.  “And they have to look into this. It has to be a culture change for the Warwick School Department.”

Since the incident, his parents say Luke has been worried everyone is mad at him, and they are trying to reassure him that it’s not his fault.

“I want to prevent a tragedy from happening. We are so lucky that something didn’t happen to Luke,” said Tim. “But the fact of the matter is that this has to be treated as if something did happen.”