The plan doesn't begin until March, meaning most students will have been learning remotely for a solid year.

PAWTUCKET, R.I. (WLNE) – After much outcry and discussion, Pawtucket students will have the option to learn in person beginning in March, after the Pawtucket School Committee voted unanimously to approve a phased return to in person learning at their Tuesday night meeting.

The plan doesn’t begin until March, meaning most students will have been learning remotely for a solid year.

Grades one through six will be able to return to school on March 1, grades seven and eight on March 15, and grades nine through 12 will have a flexible return beginning March 29. 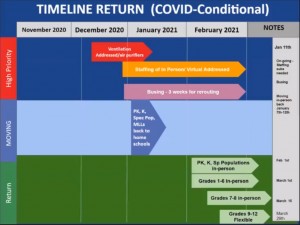 “Our buildings are ready. No, they’re not all perfect, but we do have the air purifiers that were provided to us and that were installed,” said Superintendent Dr. Cheryl McWilliams. “So it’s at this time that I’m asking the committee to approve a gradual return of in-person, for those students who want to return in person.”

This decision came after hours of testimony from parents and teachers on both sides of the issue.

Pawtucket had been the only district in the state that didn’t have an in person option.

“It’s not working for my child and for many other students in Pawtucket either,” said parent Jade Marulanda. “I have heard too many times that members of this committee think the virtual model is working for them just fine. It’s actually kind of really an insult.”

Despite the majority of people testifying in favor of in person learning, some high school teachers said that with the impossibility of stable pods, they didn’t feel comfortable shifting to in person learning right now.

“Positivity rates are not decreasing the way we thought they would be. Teachers don’t have access to the vaccine just yet,” said High School Science Teacher Jerry Sabatelli. “Many will feel much more comfortable once they get the vaccine.”

Other educators argued that families should at least be given the option for in person learning, as they see their students are struggling.

“We need to do what’s best in both situations. And that comes by giving parents the choice,” said Teacher Laurie Janczar.

President of the Pawtucket Teachers Alliance Ronald Beaupre also testified Tuesday night. He said the union was in support of a phased return for elementary students, a review of a plan for middle schoolers, but was not in favor of high schoolers returning to school in person.