NEW BEDFORD, Mass. (WLNE) – The search continues for a New Bedford man who’s been missing since May, and this week his family learned his phone has been found in a local motel.

Henry Fermino, 61, was reported missing by his sister on May 19.

Fermino also missed his own birthday, she said.

Detectives pinged his cell phone and it led them to a wooded area between Cross Road and Reed Road in Dartmouth.

On July 7, members of the Southeastern Massachusetts Law Enforcement Council (SEMLEC) Search and Rescue Unit conducted a large-scale search in the area for Fermino, but he wasn’t found.

He was last known to be at the Capri Motel on State Road in Dartmouth, which sits in between Cross Road and Reed Road where the search was conducted. 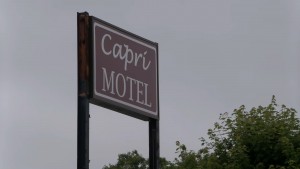 Cardoza said a family friend stopped by the motel on Monday and was told by staff that they found Fermino’s phone in the room he was staying in. It had been sitting at the front desk.

“It was there. It was in the room where he stayed. I guess the maintenance guy, whoever does the cleaning and stuff, had found it. They put his name on it and brought it to the office, put it in a bag, and left it there but…nobody said anything till now,” Cardoza said. “The Dartmouth police have been there, New Bedford police been there…why haven’t they said anything?”

She said she doesn’t know what her brother was doing at the motel, just that he had stayed there a few days.

Fermino was well known in the community, his sister said, as he worked at various local restaurants and drove a cab for years. She said most recently he was working at Knuckleheads Bar & Grill in New Bedford.

She said the family just wants to know that he’s OK, and even though it’s been two months since they’ve heard from him, they’re holding onto hope that he’ll be found.

Henry Fermino of New Bedford has been missing since May. His phone led police to the area of the Capri Motel in Dartmouth, but search crews found nothing

His sister got an update yesterday— his phone was found in a motel room, but her brother still hasn’t turned up. 5pm on @ABC6 pic.twitter.com/el5zi7u80V