Providence Police Chief Col. Hugh Clements said in a press conference Friday afternoon that police are standing guard beside four shooting victims at Rhode Island Hospital who police believe initiated the shootout, firing around 40 rounds towards a group of up to six people who were hanging out on a porch.

Police have not yet released the names of the victims or the suspects.

In total, nine people were injured and eight suffered gunshot wounds. The ninth person sustained an injury from glass.

The men from inside the truck who are currently hospitalized are on guard by police and will be taken into custody when released from the hospital, Clements said.

Charges could range from felony assault to possession. @ABC6

Police say eight of the nine victims are men, and all victims are between the ages of 19 and 25.

“We think it stems from a neighborhood feud between these so-called gang folks. We know them, and this is a continuation of retaliation against one another. So that’s what we think motivated this shooting last evening,” Public Safety Commissioner Steven Pare said Friday.

“The neighbors on Carolina Street should not have to hear or witness this type of violence. This is about one thing, illegal guns,” Clements said.

Police say this incident had several guns involved. And say it was targeted from “2 sets of groups they are familiar with”

The shootout unfolded around 6:45 p.m., where police say a silver Dodge Ram pickup truck with Tennessee plates containing 4-5 men, as many as four of them armed, pulled up in front of 87 Carolina Avenue. The armed men then exited the vehicle and began shooting towards the porch area.

Several individuals were on the porch at the time, at least two of them armed, and fired back at the truck.

Clements says a 4-door silver truck w/ 4 people inside pulled up on 87 Carolina Ave, exited truck and fired at 5 or 6 people on the porch. People on porch returned fire, men got back into truck and fled.

The men then jumped inside the truck and the driver fled. That truck, Clements said, was later dumped near the hospital. Police found it this morning.

All but one victim was driven to Rhode Island Hospital that was placed on lockdown until 5:30 a.m. Friday. Of the nine victims, three are seriously injured. Police said all are expected to survive. Some victims have already been released from the hospital.

No arrests have been made, but Clements said the men from the truck who fired shots will be taken into custody upon release. He said Providence Police officers are currently standing guard.

Police executed a search warrant at the home on Carolina Avenue and seized eight firearms – two rifles and six pistols.

Clements shied away from calling the groups gangs but said they’re known to police and he wasn’t surprised that they were heavily armed.

A search warrant was exected at the same home in 2017 and 10 firearms were seized. 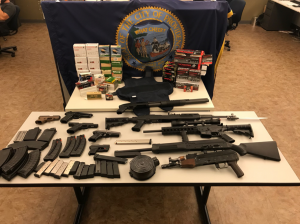 “These are groups, individuals that know each other extremely well. These are not gangs in the sense of red and blue, Cripps and Bloods, these are groups of young men in a community who easily have access to firearms and exact their revenge on each other… it’s all senseless. It’s just a cycle of violence that has been going on for years.”

Police are expected to release the names of the victims and suspects.

A bullet from last night’s shootout on Carolina Avenue hit a home next door to the house that was targeted. The homeowner tells us he’s never experienced anything like this in his 25 years living here. He and his family are shaken up. @ABC6 pic.twitter.com/5Z5PZhVBVk