PROVIDENCE, R.I. (WLNE) — The Providence Board of Licenses is scheduled to hold a hearing Wednesday for Ultra the Nightclub, the site of a shooting on September 29, 2018.

During a meeting on October 1, the Board decided to close the nightclub indefinitely after initially closing the venue for 72 hours.

See below for previous updates to this story.

The City of Providence has decided to extend the closure of a night club that was the site of a shooting this past weekend.

In a Board of Licenses meeting Monday evening, officials ruled to keep Ultra the Nightclub closed indefinitely.

Officials say the man shot this weekend at the club is in stable condition.

At this time, no arrests have been made in connection with the shooting.

A Providence nightclub will be closed as Police conduct an investigation into an overnight shooting.

Police said one victim was shot inside Ultra the Nightclub on Pine Street early Saturday.

The extent of the victim’s injuries are unclear at this time, and it is not known if any arrests have been made.

Ultra the Nightclub management released a statement on Facebook Saturday saying, “to ensure that the police have a thorough investigation Ultra will remain closed for the evening”. 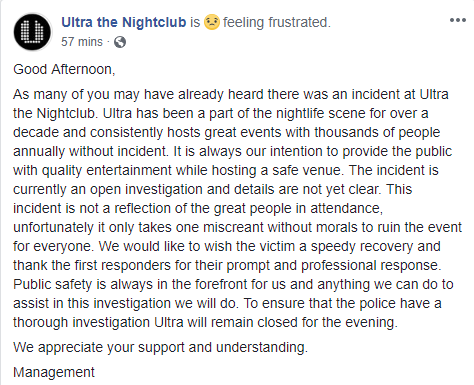 “It is always our intention to provide the public with quality entertainment while hosting a safe venue”, management said.

The incident is under investigation.

ABC6 will bring you more information regarding the shooting as it becomes available.