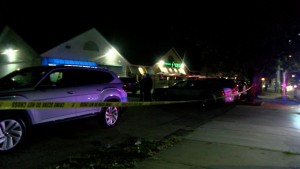 PROVIDENCE, R.I. (WPRI) – Providence police were searching for a suspect after shots were fired on Broad Street on Saturday evening.

According to police, the gunshots went off around 9 p.m. near Cass Street.

An ABC6 News crew spotted about ten evidence markers on the ground in front of a variety store.

Investigators said it was unclear if anyone was hit, but they were waiting to see if any gunshot victims ended up in the hospital.

Preparing for the Arctic Blast