Cold Temps Through The Weekend 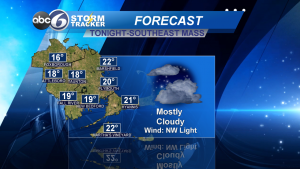 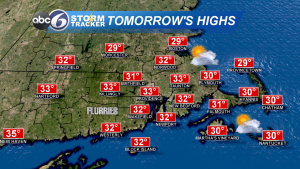 Saturday, sunny in the morning, clouds late in the day. Upper 20s. Saturday night, a chance for snow. Upper teens.

Sunday, still 4 days out a few different scenarios on the table. Here is a look at two of them: 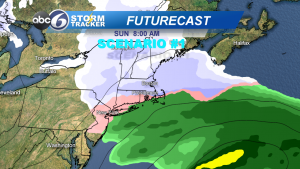 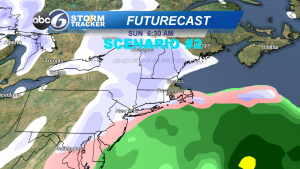 They look similar, but scenario #1 with more of an impact with snow before a change to rain. Scenario #2, much less of a snow impact. Very light snow before a change to rain. At this time, just know something is out there for Valentine’s Day, exactly how it plays out to be determined. We will keep updates coming. A much better idea by Friday. Temps Sunday, low 30s to upper 30s. Temps are even dependent on the track of the potential storm

Tuesday, another potential storm arrives late afternoon and evening. Another snow to rain scenario, but this potential storm being almost a week out will have many fluctuations with track before then. Low 30s.

Wednesday, early rain and snow, cloudy for the afternoon. Mid to upper 30s.

Slow, gradual improvements on the way as rain/snow starts to taper off

Rain and snow showers continue into the afternoon