"The power to protect your household is in your hands. It's pretty simple if you just follow the rules."

PROVIDENCE, R.I. (WLNE) – In her weekly coronavirus briefing, Governor Gina Raimondo announced Thursday that she will be extending Rhode Island’s “pause” for an additional week.

“The power to protect your household is in your hands.  Pretty simple if you just follow the rules” Raimondo said on Thursday.

This comes after the Department of Health reported 949 new cases of COVID-19 in the state, along with 14 additional deaths on Tuesday.

Beginning after the pause’s new end date, December 21 through the end of the year, schools will remain the same as they are currently.  Gyms and indoor recreational facilities and venues of assembly may reopen with limited capacity.  Indoor dining capacity will increase from 33% to 50%. 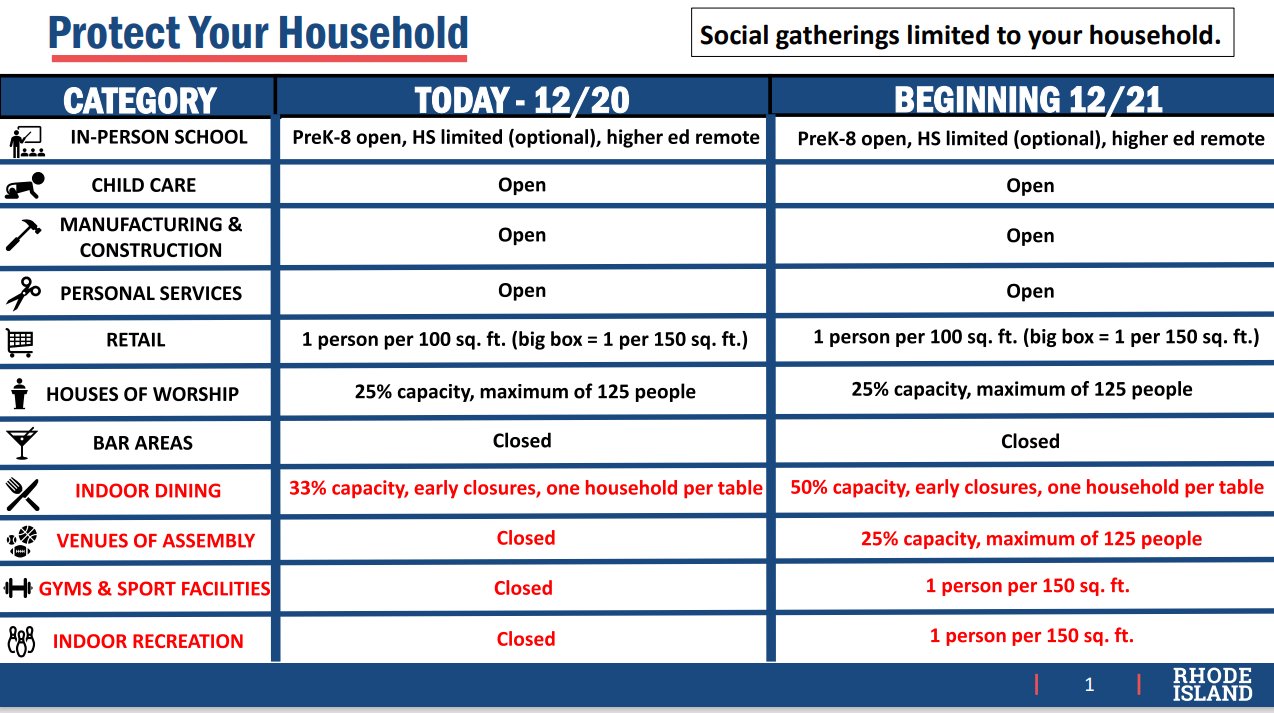 Businesses that have already applied for relief benefits during the pause will now receive a second check for the additional week added to the pause.  This additional check will be half as much as the first one received.

Additionally, Governor Raimondo is adding an extra $200 weekly unemployment benefit to cover the third week of the pause.

Data shows 2.7 million cars on the road within the past two weeks, which is a 12% decrease from the previous two weeks.

“People are following the rules, and you should too”, Raimondo declared.

Governor Raimondo said she hoped to see a quicker decline in data after the pause. Major indicators of a decline are shown in hospitalizations and percent positivity rate, which both have not shown decline since the pause.

According to Raimondo, hospitals are seeing an average of 60 people admitted per day.

“To those superintendents who go virtual, look at yourself in the mirror and tell yourself to work a little harder” Raimondo said when discussing the topic of schools.

Raimondo said out of the 182 asymptomatic pilot tests taken at Ella Risk Elementary School, there was a positivity rate of only 1.6%.

Governor Raimondo continued, saying by January statewide on-site asymptomatic school testing will be available to any school that wants it.

Here’s an outline of who will get COVID-19 vaccines when in #RhodeIsland. @ABC6 pic.twitter.com/CcfoETK3Qq

Department of Health Director Nicole Alexander-Scott gave an update on CDC quarantine rules for those who may have been exposed to the virus.

Alexander Scott said the amount of time a person should quarantine has gone down from 14 days to 10 days.  Additionally, if the person has received a negative test at least five days after exposure, the quarantine will only be mandatory for seven days.

RIDOH’s Phillip Chan went on to speak about the FDA vaccine meeting. Chan said those who have taken it so far have not seen anything unexpected from the vaccine.

“Fatigue and body aches are normal.  It shows that your immune system is ramping up, which is normal and expected”, said Chan.

According to Chan, the FDA reviews vaccines with a team of doctors and statisticians to go over technical data to monitor vaccine effectiveness, safety, side effects, and the manufacturing process in general.

“This is the beginning of the end of the pandemic”, said Chan.

Raimondo acknowledged today’s start to Hanukkah, and urged those celebrating to only gather with immediate family.

Rhode Island will remain in a ‘pause’ until Sunday, December 20.