Governor Gina Raimondo said Friday she hopes to allow salons to open at the start of Phase 2, but she doesn't yet know what the restrictions will look like.

PROVIDENCE, R.I. (WLNE) – Governor Gina Raimondo said Friday she hopes to allow salons to open at the start of Phase 2, but she doesn’t yet know what the restrictions will look like.

Raimondo said she hopes to move the state into Phase 2 the weekend after Memorial Day. She said she’s aiming for close-contact businesses like hair salons to reopen then, but the guidelines for these businesses is still unclear.

“We are running out of time so we need to kind of get moving and make some decisions,” said Kristen Lazzareschi, owner of Studio 101 in downtown Providence. “I think it’s frustrating that I just want to know, but I understand.”

Lazzareschi employs ten people in her salon and is eager to get customers back in the safest way. But with no exact date of when she can reopen, or what business will look like when she does, Lazzareschi wants a heads up soon so she can prepare.

“In a lot of states, they’re telling the salon owners that they can open but they are not fully prepared. I’m really trying to prepare as much as I can and the best I can.” 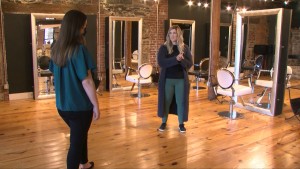 Lazzareschi is already brainstorming how to keep her clients safe for when she gets the green light.

The biggest worry, she said, is whether or not restrictions will be the same for all salons or if they’ll be tailored to the salon’s capacity. Studio 101 has 3,000 square feet of space, and Lazzareschi hopes to use as much of it as she can.

Governor Raimondo said Rhode Island Secretary of Commerce Stefan Pryor has been working around the clock with salon owners to come up with restrictions, but she said they haven’t come to a consensus yet.