PROVIDENCE, R.I (WLNE) – Governor Gina Raimondo on Friday said that there will be about a month in-between each phase of reopening Rhode Island’s economy.

Gov. Raimondo says each phase comes with new restrictions/guidelines, and it will take a few weeks to see the effect.

These are the four metrics Gov. Raimondo says the state is using to move between phases: 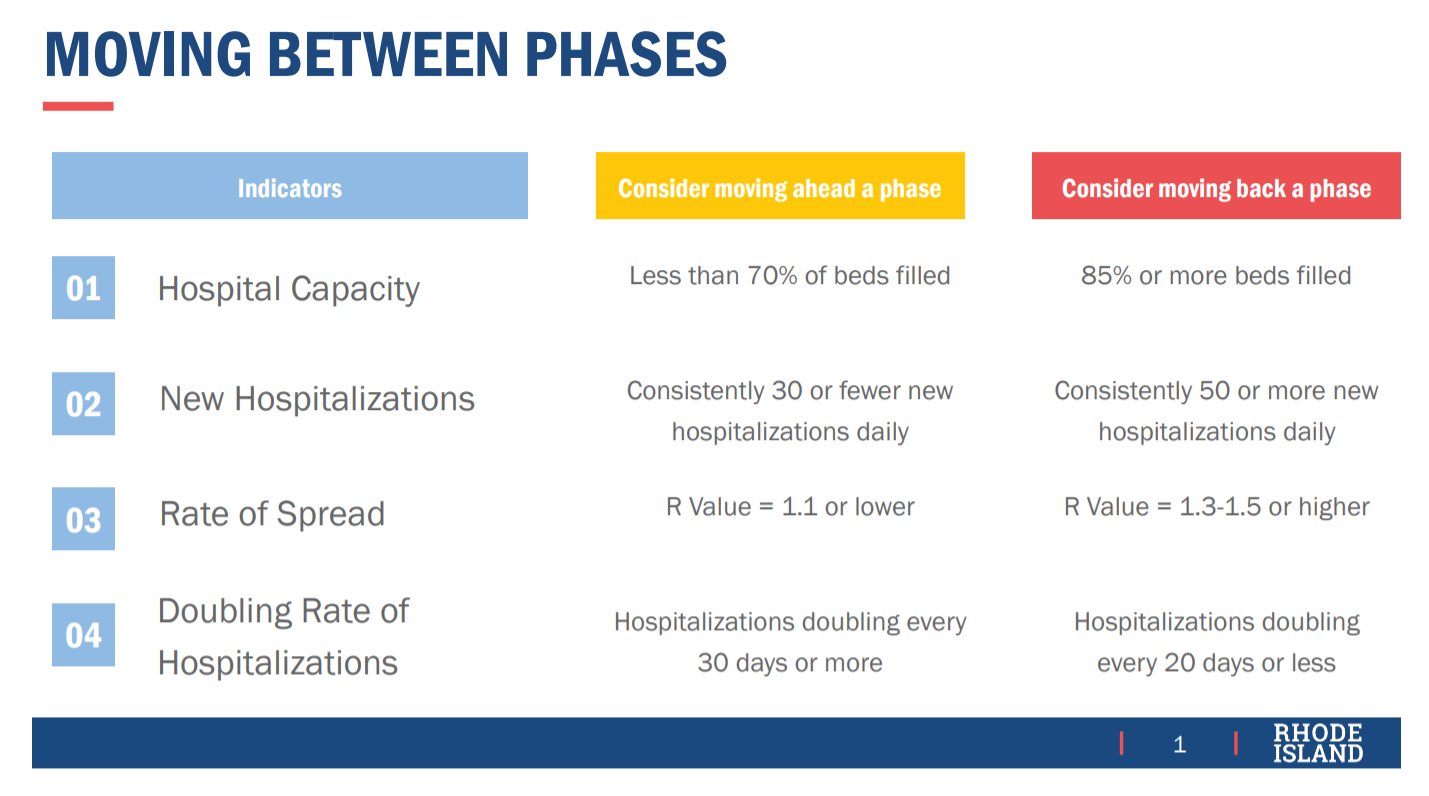 “We were in such a scary place, and now we’re not,” Raimondo said. “Now we’re in a stable place.”

Raimondo added that the state will continue to track the rate of spread and if it picks up speed, the state might have to go back a phase.

“It is totally in our control,” Raimondo said on keeping the rate of spread low.

The Rhode Island Department of Health (RIDOH) reported 203 more positive cases of COVID-19 and 11 deaths in the state.

These bring the state’s new total numbers to 12,219 positive cases and 479 deaths, with 272 currently in the hospital.

There are 63 people in the ICU, with 41 people on ventilators according to the reported numbers.

RIDOH Director Dr. Nicole Alexander-Scott noted the FDA’s announcement Thursday about the ABBOT ID NOW COVID-19 tests that the CVS Rapid Test Sites have been using. That announcement by the FDA was the tests aren’t 100% accurate (they are used at Twin River’s testing site.)

Dr. Alexander Scott said the 11% positivity rate at Twin River site is comparable to other sites in the state.

One limitation of the ABBOT ID test is that it is less sensitive than lab tests, according to Dr. Alexander- Scott.

“That’s why . . . no matter your test result, if you have symptoms, self-isolate,” Dr. Alexander- Scott added.

Next Thursday at 11 a.m. Gov. Raimondo said she will be holding a town hall on Facebook for older Rhode Islanders and their caregivers.

Body found in Florida presumed to be missing Mashpee teen

Family of motorcyclist thrown into Taunton River speaks out, wanting changes made to bridge

Police search for woman who robbed Providence CVS at gunpoint