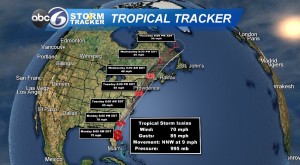 Sunday, August 2, 2020 11pm Update: Isaias remains a tropical storm near the eastern Florida coast with 70 mph sustained winds and gusts up to 85 mph.  It’s expected to move north and east along the Carolinas and Mid-Atlantic through Tuesday.  The trend in the forecast cone has been farther west, which means more potential interaction with land.  Tropical systems weaken when they encounter land, so if that track holds true, the storm is likely facing rapid weakening. 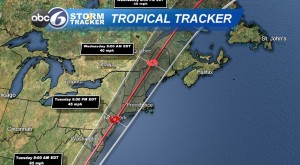 Just as the forecast track has been shifting west/inland to our south, it has also been shifting west here in New England.  The forecast cone is also becoming more narrow, but it still includes our local area.  At this point, unless there is a major change, it looks most likely that we’ll see the center of the storm pass off to our west.  If this holds true, the combination of a western pass and a weaker storm could mean lowered potential impacts for our area, but we’re not totally out of the woods. 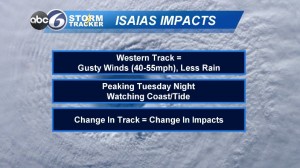 A western track would bring strong, gusty winds to our area (40-55mph), but rain would become less of a concern.  We’re still watching for rough surf and potential coastal/tidal flooding.  Any further change in the forecast cone would require an adjustment to the potential impacts.  Although unlikely, a shift to the right side of the cone would once again increase our chances at a higher impact event, because it could create a stronger storm and a closer pass. 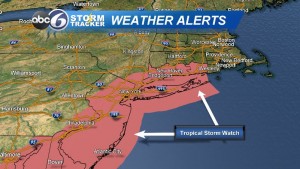 A Tropical Storm Watch has been issued for the CT, NY, NJ coasts including Long Island. The Watch does not currently include RI or MA.

Stay with ABC6 for the latest updates.  This web article will be updated with future Isaias related forecast information for our area.

Tuesday: Watching the approach of Isaias which will likely bring rain and gusty winds, especially at night.

Wednesday: Isaias leaves the area and we see improving conditions.

Sunny Today But More Rain & Wind In The Forecast

Another Rain & Wind Event This Weekend (Some Snow Possible Too)

Police search for woman who robbed Providence CVS at gunpoint

Police ID body found off I-295 by hikers; confirm homicide

Providence man walks into pizzeria after being shot in the leg