RIVERSIDE, R.I. (WLNE) – Some Riverside residents are fed up with ongoing issues in their neighborhood they say is because of a soup kitchen and day shelter that’s attracting the wrong crowd.

Good Neighbors, a soup kitchen, food pantry, and day shelter on Turner Avenue, is open from 8 a.m. to 2 p.m. daily and has been open for about five years.

“They’re not respecting the neighborhood. That’s really what it comes down to.”

Betty Galligan has lived by the shelter, that’s run out of St. Brendan’s Church, for more than 20 years. She said over time, the patrons at the shelter have become a nuisance.

“We’ve noticed public urination, right across the street from our front door, and it escalated to the point where someone broke into my home.”

Galligan said her home was broken into last month in broad daylight. The robber got away with cash.

“We were told on the night of our break in that a person matching that description was leaving the soup kitchen at the approximate time that the robbery occurred in my home,” said Galligan.

“Good Neighbors shares the concerns of all residents of our local community and sympathizes with all victims of these regrettable incidents, whether or not they may be attributable to some of our patrons,” Wild said to ABC6 in an emailed statement.

Wild added that anyone at the shelter who would commit such crimes would be banned.

“As a hunger relief agency, we are proud of our mission, and hold our organization and the clients we serve to a high standard of conduct.  If we can get specific information on the perpetrators, we would ban them from our site and cooperate with the local police to prosecute them accordingly,” wrote Wild.

A resident who didn’t want to be named said she won’t allow her children to play in her front yard anymore, out of fears of what they might see. She said she’s found piles of alcohol in her yard, and has been cat-called and stared at while in her driveway. 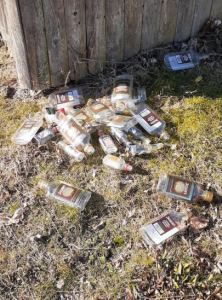 Resident photo of alcohol bottles outside of Good Neighbors shelter

“People get off the bus, and if the shelter is not open yet, they’re sleeping on the sidewalks, they’re fighting, they’re cursing. We can’t open our windows on a nice day because the smell of marijuana comes through your house. Their mission is wonderful, but they just don’t belong 30 feet from people’s homes.”

Good Neighbors Soup Kitchen in Riverside is not a good neighbor, residents say… Public urination, drug use, drinking, & fighting are just some complaints. Residents won't let their kids play outside, one woman even had her home broken into. Hear from both sides at 5:30 on @ABC6 pic.twitter.com/prW8hUkbaX

Galligan said when the robbery at her home happened, she decided something needed to be done.

She and her neighbors have planned a neighborhood meeting set for Thursday, March 12, from 5:30 to 7:30 in the Community Room at the Riverside Branch Library.

Wild said he and other representatives from the shelter will be in attendance. East Providence Mayor Bob DaSilva is also planning to attend.