A Federal Hill restaurant wants to warn other businesses after they say they were scammed by someone through popular online ordering platform Grubhub.

UPDATE: As of Tuesday afternoon, Grubhub reimbursed Opa for the order.

PROVIDENCE, R.I. (WLNE) –  A Federal Hill restaurant wants to warn other businesses after they say they were scammed by someone through the popular online ordering platform Grubhub.

It happened last Friday night, when workers at Opa say they were excited to fill a nearly $400 food order.
But they say things turned sour when the person who had picked up that order turned around and scammed them by complaining to Grubhub that he’d never received his food.

Like many restaurants right now, Mediterranean restaurant Opa on Federal Hill is trying to survive on takeout and delivery.

They use ordering platforms like Doordash and Grubhub to fill those orders.

“Unfortunately at the moment we’re stuck using them because we need the business to come in,” explained Opa’s Manager Francois Karam. “It’s very slow.”

But Karam says they’re trying to be extra careful now after filling that $351 order that they say was effectively stolen from them.

“Came and picked up about three boxes of food, took it home,” recalled Karam.

The person made the order through Grubhub. He was seen on surveillance footage picking up the food.
But eight hours later, Grubhub called the restaurant owner to say the customer never received his order. 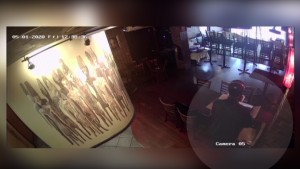 “At 3 A.M. they canceled the order and received the full amount back,” said Karam.

They tried calling the man but it turns out he had used a fake name and number, leaving Opa out hundreds of dollars.

“It’s really unfortunate to see that especially with what’s going on in this world, to see that people are still trying to scam people,” said Karam.

In a statement, a spokesperson for Grubhub said in part: “These are serious allegations and we are treating them with the utmost importance and doing a thorough investigation.”

However Karam says Grubhub has yet to return his calls.

“We notified them that we have footage and they said, ‘No’ either way they were going to refund
the consumer,” said Karam. “There’s a lot of loopholes that Grubhub needs to fix on their end. But for now we just need to be extra cautious.”

Karam says the best thing you can do to help restaurants like theirs avoid scams and issues like these is to call and order directly with them.

On Tuesday, Grubhub issued a statement, saying the restaurant had been reimbursed for the order:

As soon as we became aware of this situation we launched a thorough investigation and have since refunded the restaurant for the total amount of the order. We have also blocked this diner from using our platform. We know these are tough times for restaurants and we have zero tolerance for misconduct from our diners.

Kelly Preston, actor and wife of John Travolta, dies at 57

Customers say they feel safe dining out, but there's room for improvement