PROVIDENCE, R.I. (WLNE) – Rhode Island Governor Gina Raimondo announced, during her weekly briefing Friday afternoon, that the current pause due to a spike in COVID-19 cases will end on Monday December 21.  The governor cited improvement in a number of important metrics as a reason for letting the current pause expire.

After many weeks of maintaining a path in the wrong direction, data for the state shows that R.I. is moving in the right direction. For the first time in over two months, all of the arrows are pointing down.

The governor said the improvements come from hitting the pause button for three weeks, while Rhode Islanders followed through doing a fantastic job during that time with a real decline in mobility. 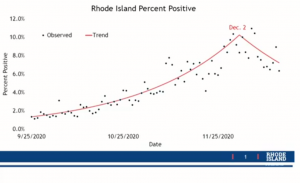 While the Pause will end, Governor Raimondo stressed that this will be a “slow dial-up” and Rhode Islanders shouldn’t expect to return to “normal” next week.  Restaurants will be allowed to increase indoor dining capacity to 50% and gyms will be permitted to reopen. Additional updated, reopening guidelines can be found here.

With the Christmas holiday only a week away, the Governor also stressed that holiday gatherings should be limited to the household and should not involve extended family members. 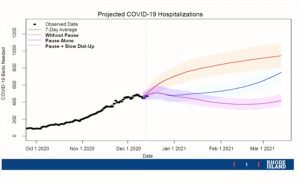 A slow dial up shows an improving trend for the state. The red line in the above graph shows where we would have been without a three week pause. The blue lines show a projection if the state were to lift the pause and directly operate the way R.I. was operating prior to the pause. Lastly, the purple lines show a slow dial up of the state’s economy which will begin on Monday. The purple line is the best outcome of the three scenarios.

All of the state’s hospitals are stretched, but the pause allowed for more stability. Two field hospital’s still remain open.

Governor Raimondo stressed there is no pure certainty as to where we go from this point, but what happens next depends on how residents of the state behave over the holidays. She added, if people do not adhere to the rules, the state may have to return to another pause.

In the meantime, residents are encouraged to stick to mingling with the people within their household, even while holiday shopping or dining out, and are asked to wear a mask as much as possible.

Raimondo said, these things are in our control. She also added that socializing outside is much safer than doing so inside.

Faith leaders throughout the state were also thanked by the Governor for their collaboration and partnership with the state, and for adhering to guidelines and restrictions over the holidays.

A big takeaway from today’s press briefing is testing. The Governor is encouraging everyone to go and get tested, saying tests are simple, effective, and protects households. Raimondo says that testing in the state has improved compared to a couple of months ago. There are no lines and are offered at no cost. She says many can get tested over a 15-20 minute span and even schedule a same day appointment. Appointments can be made on portal.ri.gov. Governor Raimondo said, “In an ideal world, everyone would get tested once a week.”

Beginning this weekend, the state will be setting up pop up test sites at various locations. These pop up sites may be located at the mall, a testing table at a grocery store, the zoo, etc. If businesses would like to take part in becoming a pop up test site, they are asked to contact info@commerceri.com.

The pop up tests are free and do not require an appointment. The goal is to perform 20 thousand tests via these pop up locations.

Lastly, today the Governor briefly highlighted schools in the state. Next week, schools were given the flexibility for in-person learning. After returning from the holiday break, the goal is to have all districts back for in-person learning by January 15. She said, this staggered approach worked well in the fall and that is why it was chosen to be implemented again.

Additionally, school districts will see an increase in testing once the new year is here. The goal is to ramp up in-school testing on a regular basis for students, teachers, and staff with or without symptoms in addition to the K-12 testing line that is already in place.