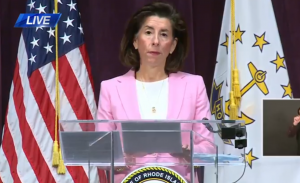 Providence, R.I. (WLNE) – Rhode Island Governor Gina Raimondo announced Thursday afternoon that the Rhode Island Pause will continue at least one more week, through Sunday, December 20th.  She says while some data is moving in the right direction, it’s not been enough to end the pause at this time.

With the Pause entering a third week, Governor Raimondo said the state will extend business assistance for a third week as well.

The Governor also announced that schools will remain open for in-person learning and houses of worship will be permitted to remain open at their current capacity through the end of the year.

She also continued to urge Rhode Islanders to limit holiday gatherings to the household.

Man hospitalized after being shot in chest in Pawtucket