The State Representative's tweet opposing Critical Race Theory blames a breakup with a friend on race.

PROVIDENCE, RI (WLNE) – Rhode Island State Representative Patricia Morgan is defending a controversial Tweet that went viral on December 28 accusing a former friend of being “hostile and unpleasant” towards her for being white.

The following tweet was posted by Representative Morgan, 71, just after 10 A.M. on December 28: 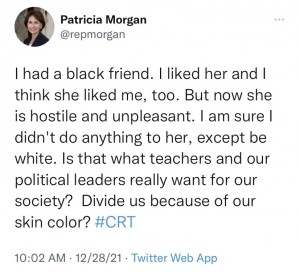 The social media post gained national attention from as far as Hollywood, where renowned actor George Takei slammed the State Rep. “I had a white friend. I liked him and I think he liked me, too. But then Pearl Harbor happened and whites became hostile and unpleasant. I am sure we didn’t do anything but they sent us to camps anyway. And now they don’t want to teach about this because it make kids feel bad.”

In an interview with ABC6 News, the former first female Minority Leader says she never intended the post to be harmful. “You know, this is the grievance culture, and they want to take offense to it. I didn’t mean it to be controversial or offensive. I’m seriously sad,” says Morgan. “I’m sad for America. I’m sad for my friendship with this friend. I’m sad for where our society is going.”

Harrison Tuttle, Executive Director of the Black Lives Matter Rhode Island Pac, says the organization is now calling for the Representative’s removal from all boards. “My first original thought was: ‘Are you kidding me?'”, says Tuttle. “We can’t have elected officials essentially dog whistling and race-baiting people of color, and then connecting it to political strategy and critical race theory.”

Despite receiving heavy backlash on Twitter, Representative Morgan defends her stance on critical race theory in classrooms. “If we have Ibram Kendi’s book on anti-racism – it’s a theory, which by the way, critical race theory is a theory, not a fact- so if we have his book in the classroom, we should have one that’s on the other side to add balance to the educational experience for our children and to increase their critical thinking. If we talk about mass incarceration, we should also talk about how the war on police, defunding our police forces, is hurting black communities. So adding balance and not allowing just one side to be presented.”

Tuttle says the Representative “doesn’t understand” critical race theory, and described the social media post as “hurtful”. “What ends up happening is people in positions of power throughout our state and throughout our country’s history have made comments like that and have really discounted the experience of black and brown folks and what they go through on a day to day basis. And that’s what critical race theory is ultimately about; it’s the study of our history.”

The Black Lives Matter RIPAC chapter publicly called for Representative Patricia Morgan’s removal. “I think that would be a really strong message not only to her, but to anyone who thinks about making really divisive and hateful comments like this.”

In a statement sent to ABC6 News, State Representative David Morales (District 7) also condemned Representative Morgan’s message. “Unfortunately, Representative Morgan’s ignorant comment regarding ‘critical race theory’ and her perceived relationship with a person of color was a selfish attempt to draw media attention and try to anger white people by making them feel as though they are being attacked by our public education system. While doing so, she is contributing to tokenism and fear-mongering rhetoric around an issue that does not even exist in the first place. Similar to other right-wing politicians who are constantly complaining that white people are being attacked and

labeled as racists by liberal America, I can confidently say that Rep. Morgan cannot even explain what ‘critical race theory’ is.”

ABC6 News also reached out to Representatives George Nardone and Sherry Roberts, who co-sponsored a bill with Rep. Morgan opposing critical race theory in classrooms in March. Both have declined to comment.