PROVIDENCE, R.I. (WLNE) – Rhode Islanders are gearing up for another election.  This time, they’ll vote on a multitude of state measures approving or rejecting bond funding in several categories.

Topher Hamblett is the Director of Advocacy for Save the Bay, and Campaign Coordinator for the Yes on 2 RI Coalition.  Hamblett says, “Question two is a $74,000,000 ballot measure that would make major investments in clean water and Narragansett Bay, Rhode Island’s recreational facilities, greenways along urban rivers, and overall contribute to the environmental health of Rhode Island.”

Under the Beach, Clean Water, and Green Bond, the funding would be divided between several environmental improvement projects. 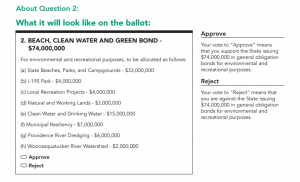 Hamblett says, “All of these resources are central to Rhode Island life.  They are the foundation of much of our economy in Rhode Island.”

Similar bond measures have passed in recent years, but this one is bigger, addressing added concerns like the need for dredging along a second section of the Providence River, downstream from an area that was dredged in late 2019.

Hamblett says, “In order to keep it navigable, and also to keep it usable for things like WaterFire.”

He says funding is important to continue environmental improvement and cleanup work that’s gone on for decades now.

Hamblett says, “We have stepped up and made investments in wastewater treatment plants that are really the first line of defense for Narragansett Bay.  Rhode Islanders know enough to protect the progress we’ve made and build upon it.”