Governor Gina Raimondo announced multiple new restrictions on Thursday, in effort to stop the spike of COVID-19 in Rhode Island.

Today, we announced seven new measures as part of our Revised Phase 3. These measures will take effect on Sunday, November 8. pic.twitter.com/nd0N98jY9s

The stay-at-home advisory will begin Sunday night, and will remain in effect on weeknights from 10 p.m. to 5 a.m.

Governor Raimondo has ordered restaurants, gyms, bars, and recreation facilities to end service at 10 p.m. on weeknights, 10:30 p.m. on Friday and Saturday.  Restaurants can stay open for take-out and delivery only.

The advisory will be in effect for two weeks.

A text alert was sent out on Sunday, reminding the state of these new measures. 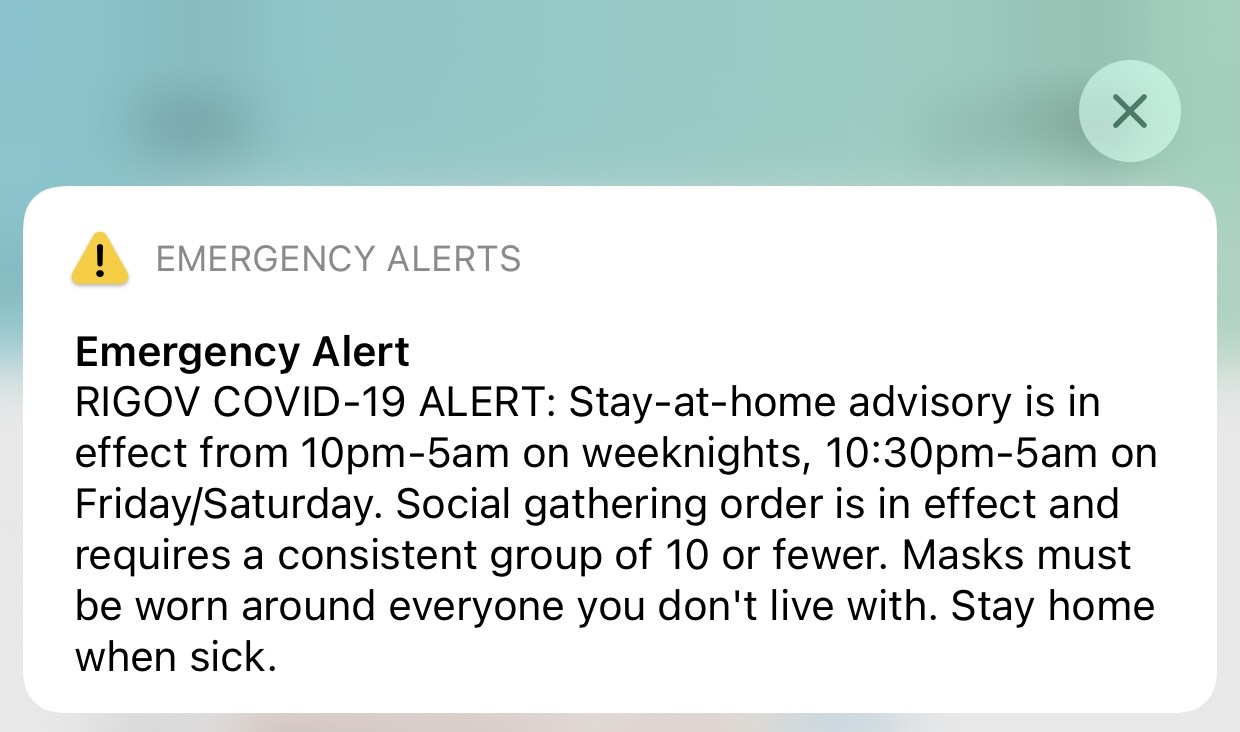 The governor says the logic for the restriction is data indicating that people are less likely to wear masks and keep a social distance later at night.

Some say staying home for now is a sacrifice they’re willing to make.

“It’s a small inconvenience for a larger good,” said Alyssa Francis of Providence. “Just Friday, Saturday’s tough. But I’d rather try to help with the rates and the numbers, bring those down, and then we could go back to living the way that we were, hopefully.”

But not everyone is as on board with the new restrictions.

“I shouldn’t be told to stay in my home, unless it’s some kind of life-or-death thing,” said Michael Moan of Smithfield.

Others are concerned about the impact on small businesses like restaurants.

“I feel real bad for the businesses,” said Kosta Bitsis of Seekonk. “It’s a tough business as it is, there’s a lot of competition – especially in Providence, there’s a lot restaurants. So they’ve got their work cut out for them.”

But others say it’s still possible to support these businesses – if you make the effort.

“Clearly if you want to go out to eat you’d better get out there earlier,” said Karen Asher of South Kingstown. “Plan ahead and make it work.”

The stay-at-home advisory is set to last for the next two weeks, but if cases continue to rise, the governor says more aggressive measures may be necessary.