PROVIDENCE, R.I. (WLNE) – The Department of Environmental Management is flying purple flags at Rhode Island state beaches to warn swimmers of the possible presence of the Portuguese Man o’ War.

This dangerous sea creature has long tentacles and a painful sting.  According to the DEM, one swimmer at Scarborough State Beach was stung Monday around 5 p.m. 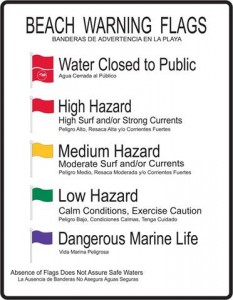 Donna DeBiasio of Providence says she also spotted one near Napatree Point in Watch Hill on Tuesday.

“Reddish, purple-ish, jellyfish-looking,” she said. “And I did say, ‘What’s that? I don’t know if I want to go in this water.’”

Jason McNamee, DEM Deputy Director of Natural Resources and a marine biologist, urges swimmers to swim at their own risk and stay vigilant.

“If swimmers see something that looks like a balloon floating on top of the water, they should stay far away,” says McNamee. “Once the man o’ war gets into the surf zone, if the water is rough, the tentacles can break apart and they can continue to sting even while unattached. The sting is very painful and can leave scars on people with more sensitive skin.”

“They’ve got very long tentacles that grow up to even 50 feet long,” she said. “So where you see the blue bottle floating head part of the animal, the tentacles can be drifting behind them much further away. Which is why we urge people to be cautious. If you see one, stay very far away.”

She adds that this influx of Portuguese Man o’War is likely the result of a patch of warm water breaking from the Gulf Stream, meaning the creatures won’t stay here forever.

“Because they are a more tropical species, as the water temperature starts to cool down, they most likely won’t survive here,” Rodrigue said.

DEM staff will be monitoring all beaches for signs of the Portuguese Man o’War.