Shawn Chase is trying to raise money to help his foster family defray the costs of his worsening condition.

SCITUATE, R.I. (WLNE) – A Scituate man battling ALS is asking for the community’s support to help his family with rising costs as his condition worsens.

Now he wants to help his family, who took him in when he was just 14-years-old, defray the
high costs of having to make their lives completely handicap accessible.

Lisa Vota and Chase met about 15 years ago. Vota is Chase’s mother, but only became so after he ended up in her home as a foster child when he was 14.

“My mother had to give me over to DCYF. I went from group home to group home,” said Chase. “And eventually I found this one where I am now.”

Once he aged out of the foster system he stayed with Vota and her family.

Never did they imagine that in his late 20s, he would completely change their lives – again.

Roughly two years ago is when doctors diagnosed Chase with ALS, or Lou Gehrig’s Disease, in which you lose the ability to control your muscles, and eventually walk, talk, or breathe on your own.

“I was thinking, ‘Oh my God it can’t be, it’s got to be something else.’ Because he was so big, and so strong,” recalled Vota. 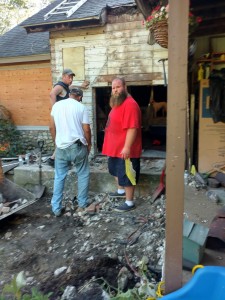 “I just couldn’t believe that it was true,” said Chase.

In the last six months his mother says eating and speaking have started to become more difficult.

“Trying to get used to not being able to do much of anything,” said Chase.

Now Chase has started a Go-Fund-Me to help make things easier on his family.

He’ll soon be in a motorized wheelchair 24/7 and needs a van to transport him.

They’ll also need to make modifications to their home so he can get in and out easily, and a generator for when he eventually has to go on a breathing machine.

“Whatever it takes we’re going to do. I don’t care what I have to make it out of,” said Vota. “I think Shawn realized just how much we do love him and, we’re not quitting.”

Chase and his family had also been planning to take a cruise, go camping, and travel, before he got too weak, but then the pandemic hit and he is unfortunately considered high risk.

They are hoping to use the wheelchair van to get Chase out of the house as much as possible.

Man arrested at Brown University for sneaking into dorms identified