This ABC6 StormTracker Weather post has been formatted with the most recent updates at the top, followed by older updates. 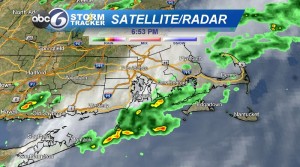 SATURDAY 6:57PM UPDATE: With just a few weaker offshore showers/storms, the threat for severe weather appears to have mostly passed.  A few isolated storms have been forming northwest of us, but the main event is over.  There will be no further updates to this post.  Visit abc6.com/weather for future forecasts. 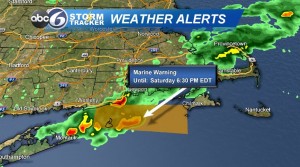 SATURDAY 6:24PM UPDATE: A few strong thunderstorms remain near Narragansett, Block Island, and the waters east of Block Island.  Storms are moving east/southeast, and have prompted a Marine Warning. 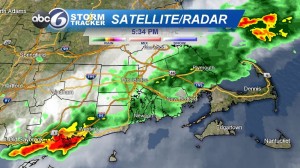 SATURDAY 5:41PM UPDATE: MOST spots have quieted down quite a bit, with some light lingering rain showers. However, along the CT coast, just west of Westerly, a strong thunderstorm continues. I do think soon we’ll be able to say the severe weather threat has passed. Just watching that one straggler. 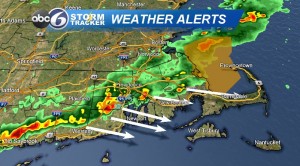 SATURDAY 4:51PM UPDATE: Lots of weakening happening with the line of storms as it gets closer to the coast. There are still some downpours, rumbles of thunder, and gusty winds, but all in all the line is a shell of what it once was. That weakening trend should continue as it moves offshore. 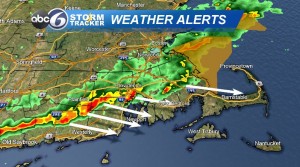 SATURDAY 4:36PM UPDATE: All warnings have been dropped for our area, however a line of thunderstorms continues to move through toward the east/southeast. That just means the storms aren’t strong enough to continue to require a warning, but they’re still out there. 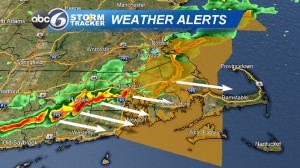 SATURDAY 4:26PM UPDATE: Strong thunderstorms continue to push through toward the east/southeast, although many of them do not meet the criteria to issue a Severe Thunderstorm Warning.  Regardless of whether or not a specific storm receives a warning, it’s always important to head indoors as one of these storms approaches the area. 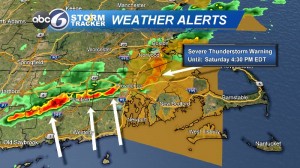 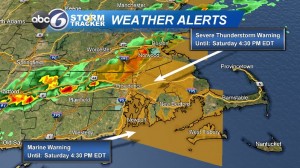 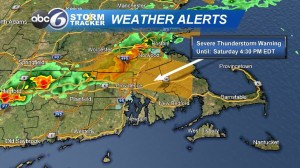 SATURDAY 3:32PM UPDATE: As the line of storms continues to press toward the east and southeast, the Severe Thunderstorm WARNING has been extended to include northern Bristol and Plymouth Counties in Massachusetts. 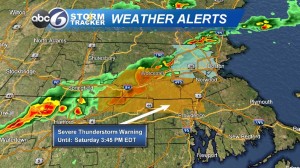 SATURDAY 2:54PM UPDATE: The Severe Thunderstorm Warning has now been updated to include northeastern RI and far northwestern Bristol County in MA. As the storm approaches, be on the lookout for heavy rainfall, frequent lightning, hail, and damaging winds. 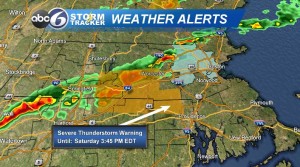 SATURDAY 2:45 PM UPDATE: A Severe Thunderstorm WARNING has now been issued for northwestern and north central Providence County. A storm is approaching from central Massachusetts that could produce damaging winds and hail. Move indoors as this storm approaches. **Follow Meteorologist Tim Studebaker on Facebook & Twitter for real time updates throughout the day.** 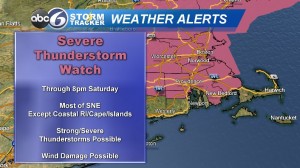 A Pleasant Night Ahead

Morning Rain Friday But Sun Into The Weekend