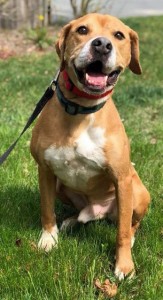 UPDATE: According to Animal Rescue Rhode Island, they have received nearly 100 adoption applications for Billy, and things are looking great for him.

ARRI will keep everybody updated on what’s next.

Since the shelter temporarily closed in March due to COVID-19, ARRI set a record for the highest monthly adoptions ever with 63 animals. Unfortunately, Billy was not one of them.

For nearly four years, Billy has watched pup after pup leave the shelter for their forever homes.

In a statement from ARRI, “It’s been mind-boggling as to why he hasn’t been adopted. He’s sweet, loyal, and affectionate. He loves to give wet, slobbery kisses. He’s been obedience-trained. Billy is hoping to get his fairy-tale ending and find his forever home. Getting Billy adopted could be considered as hoping for a miracle, but there’s no better time than now to ask for one.” His adoption fee has already been paid for by an anonymous donor.

Back in 2016, Billy completed an 800-mile journey from a high-kill shelter in South Carolina to Animal Rescue Rhode Island through a life-saving program called “Bark & Ride.”

Bark & Ride is a program that rescues abandoned animals from high-kill facilities in the southern part of the U.S. and transports them to AARI’s no-kill shelter, giving them a second chance at life.

The program has saved the lives of over 1,800 animals who would have otherwise been euthanized.

Billy’s adoption fee, as mentioned earlier, has already been paid for by an anonymous donor. He’s just waiting for that special forever home.

'There was a man in my closet': More students come forward at Brown University