Councilor Keith Stover made the motion to set the hearing by Aug. 22. The council approved the hearing on a 5-0 vote.

The vote came after members of the public spoke out about the recent violence for nearly two hours with most pointing the finger and singling out Ballard’s at the source of the issues.

“I ask you why didn’t you close them after the Fourth of July?! This would not have happened,” said one resident.

#NOW: Public session is about to begin.

Residents on the island will be able to speak in front of the council, after eight were arrested due to violence at Ballard’s and on the ferry Monday. @ABC6 pic.twitter.com/l4sLevjgG6

Stover also requested to obtain call logs from May up until now for service calls from police, fire and the medical center stemming from Ballard’s.

The members of the New Shoreham Town Council issued a joint statement following the meeting: “The council and the community were united in feeling that the dangerous and offensive behaviors witnessed by our residents and, via various media rose to a level requiring very clear enforcement action. The decision to move forward in this manner is consistent with state statutes governing the licensure of liquor-serving establishments, which guarantees due process.” 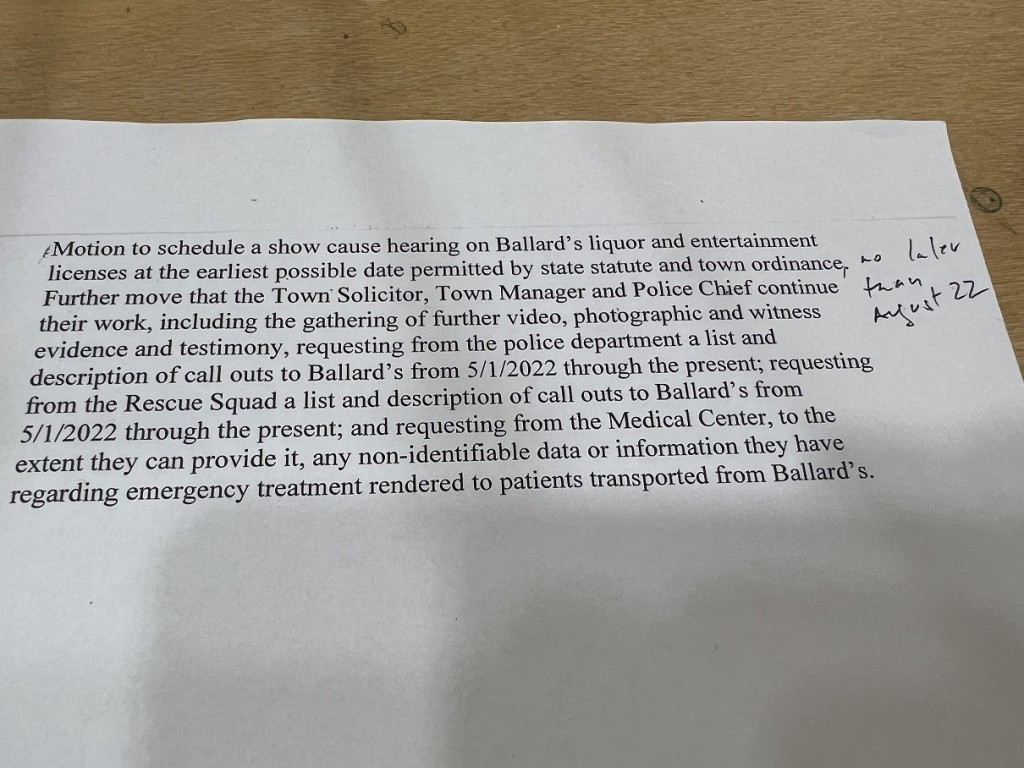 This is an image of the motion for a show cause hearing on Ballard’s liquor and entertainment licenses. (WLNE)

The call to review Ballard’s licenses comes after a fight broke out at the resort Monday that led to one arrest. That fight was followed by a larger scuffle on the Block Island Ferry that night that led to seven arrests.

Ballard’s also came under fire for rowdy crowds over the July 4 weekend.

A representative for Ballard’s said they do not have comment at this time.