Some of his alleged victims tell ABC 6 they believe there are more women out there that he has abused.

LINCOLN, R.I. (WLNE)- The Rhode Island State Police have arrested a personal trainer based in Lincoln and charged him with 13 counts of second-degree sexual assault.

According to police, 26-year-old Aaron Day is a personal trainer, and the owner and operator of All Day Physique, a gym located in Lincoln.

ABC 6 spoke with three of his alleged victims, who will be kept anonymous to protect their privacy.

“He was a good person in the beginning and then his true colors showed,” said one woman.

The three women detailed similar experiences of starting things off normally, but the alleged abuse starting shortly after they began training with him.

“Groped me multiple times in a thirty minute span. And I was just absolutely paralyzed,” said one woman.

According to social media pages for the gym, Day opened his business in the summer of 2019.

Prior to that, we’re told he trained in other gyms like American Muscle Corps., owned by Gail Bolden, who says she saw him act inappropriately with female clients.

“Other trainers saw it, I saw it, my clientele saw it,” she explained.

Pictured below, she says, is him inappropriately spotting someone for a pull up. 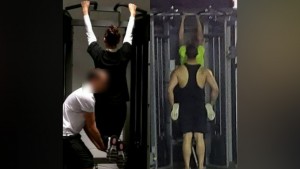 On the left, Bolden says, is the correct way.

One woman told ABC 6 she went from training with Day, to working with him, and was allegedly being abused for years.

“I was too afraid to say anything, to speak up about it, until one day I just decided to leave his facility, his gym, for good,” she said.

All of the alleged victims ABC 6 spoke with say they hope more women will come forward.

“Not everyone is able to say what happened to them and if they can, just to help the situation, it would be best so nobody could go through this again. Because it’s not something that you brush off. You live with that,” said one woman.

When ABC 6 arrived at the gym Thursday evening, it appeared Day was walking back in to his business.
A reporter with ABC 6 asked the person at the door if he’d like to make a statement, but was told no.

The investigation is ongoing, and anyone with information is urged to contact the State Police Major Crimes Unit at 401-462-7375.