Strong winds left trees toppled in Narragansett including in one woman's yard on Ocean Road damaging some of her property.

NARRAGANSETT, R.I. (WLNE) – Strong winds left trees toppled in Narragansett including in one woman’s yard on Ocean Road, damaging some of her property.

Kathy Mahoney’s driveway was littered with giant branches in the aftermath.

“The electricity went out,” said Mahoney. “The transformers were making all kinds of crazy noises. So it was frightening.”

“Everything just went so fast, so quickly,” she said. “That tree went down and then I looked down there and saw that.”

‘That’ referring to a decades old maple tree in her yard that seemingly split in half. Part of it fell onto her greenhouse and shattered a portion of its wall.

The storm also pulled a tree on a street nearby right out of the ground. 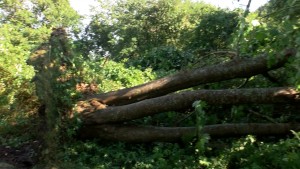 “And then other places – there are two basketballs sitting out on the lawn that never moved!” Mahoney said.

Though she’s upset about the tree, she says it’s fortunate the greenhouse wasn’t too badly damaged.

They also lost power at their home for about an hour during the storm.