Brown Tips Off Rivalry Week with Big Win over Bryant 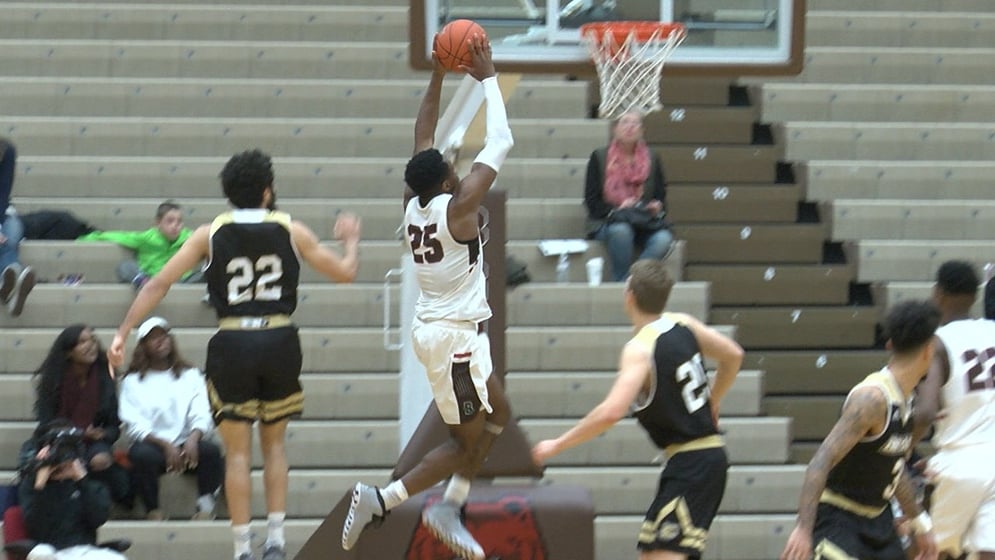 The Bears improve to 5-2 on the season, while Bryant falls to 1-4 overall.

The Bears out-rebounded the Bulldogs by a wide margin, 45-36, while blocking a season high 10 shots. Brown's defense held the Bulldogs to 20-percent (5-of-24) shooting from beyond the three point arc.

Overall, the Bears shot a torrid 55-percent, connecting on 31-of-56 field goals, while holding Bryant to 29-percent (21-of-72) shooting from the field.

"That was our best defensive performance all year," said Brown head coach Mike Martin. "Obi Okolie really contributed as a defensive stopper. It's a team effort and Obi plays with discipline and knows our system. We have length and good physical ability, and Desmond and Tamenang (Choh) really protected the rim."

Brown junior Joshua Howard (Charlotte, NC) came off the bench to score 11 points on 5-of-8 shooting from the field, and paced the Bears with eight rebounds. Bears' junior Brandon Anderson (Mahwah, NJ) also scored in double figures with 12 points, connecting on 4-of-6 field goals. Okolie had six points and a game high four assists.

Bryant's Adam Grant led all scorers with 20 points on 8-of-17 shooting. Bryon Hawkins (12 points) and Joe Kasperzyk (10 points) also scored in double figures for the Bulldogs.

Brown opened up a 16-6 lead to open the game, completing the run with a trey by Howard just 6:20 into the game.

After Bryant made consecutive baskets to trail, 16-10, Brown broke the game open with a 14-0 run to take a 30-10 advantage following two free throws by Okolie with 6:05 left in the half.

A free throw by Choh gave the Bears their largest lead of the half, 37-16, but Bryant closed the half with five straight points to trail, 37-21, at intermission.

Brown's domination continued in the second half with the Bears building a 62-32 lead at the 11:45 mark after a three-point play by junior Zach Hunsaker (North Salt Lake City, UT).

Brown heads down to Kingston, RI, on Wednesday, November 28 to take on the Rhode Island Rams. Tip-off is 7:00 pm at the Ryan Center.