Celtics slam Hornets at the Garden even without Kyrie 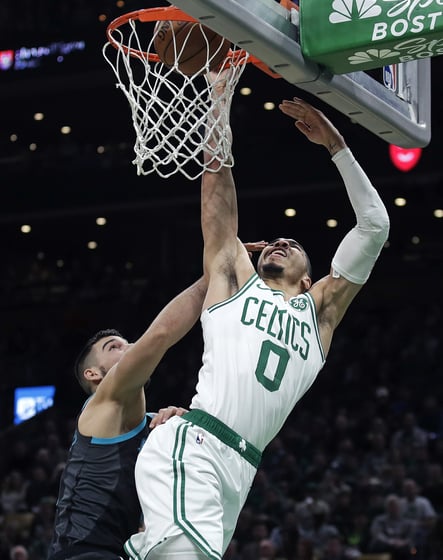 Terry Rozier had 17 points and tied a career high with 10 assists in place of Irving, who missed his second straight game with a left hip strain.

Marcus Morris scored 15 points, Al Horford had 14 and Gordon Hayward 12 for the Celtics, who won for the seventh time in eight games.

Morris knocked down a 3-pointer from the right wing with 6:49 left in the third period to put Boston ahead 76-69 and started a 25-6 quarter-ending run.

The Celtics led 98-75 after three and ran the lead up to 35 during the fourth.

TIP-INS     Hornets: After playing 19 minutes in Monday's win against the Knicks, PG Tony Parker sat to rest his sore right ankle. Rookie two-way G Joe Chealey was active for the first time in his NBA career. ... Coach James Borrego said C Cody Zeller, out since Dec. 31 while recovering from right hand surgery, is ``about a week away'' from returning.

Celtics: Irving, who last week earned his sixth All-Star selection in eight seasons, missed his second straight game with an injury the team believes he suffered during Saturday's loss to Golden State. ``Hopefully he'll be available Friday (against the Knicks). If not, Sunday,'' coach Brad Stevens said. Boston improved to 6-2 without Irving this season.

RISING RUMORS     Tatum will play for Team USA in the Rising Stars game for a second straight season during All-Star weekend in Charlotte. The 20-year-old Celtics forward isn't as certain where he'll play after that with the NBA's trade deadline looming on Feb 7.

``I mean, it's good to be wanted,'' Tatum said about his name popping up in trade rumors surrounding New Orleans Pelicans star Anthony Davis, whose agent publicly requested a trade Monday. ``I'm not a free agent. I don't have any control. I can control what I can control. Just go out there and play.''

BEAT L.A. (AGAIN)     With the Patriots set to face the Rams in Super Bowl LIII on Sunday, the Celtics were gifted Pats-themed T-shirts saying ``Beat LA'' from New England wide receiver Julian Edelman. The rally cry, which originates from the Celtics' rivalry with the Lakers, was also adopted by Red Sox fans during this year's World Series against the Dodgers.