Six Friars scored in double figures for the second times this season as the Providence College men's basketball team defeated the Merrimack Warriors, 93-56, on Tuesday, November 19 at the Dunkin' Donuts Center in Providence, R.I. The Friars improve to 4-0
Tuesday, November 19th 2019, 11:40 PM EST by Ian Steele 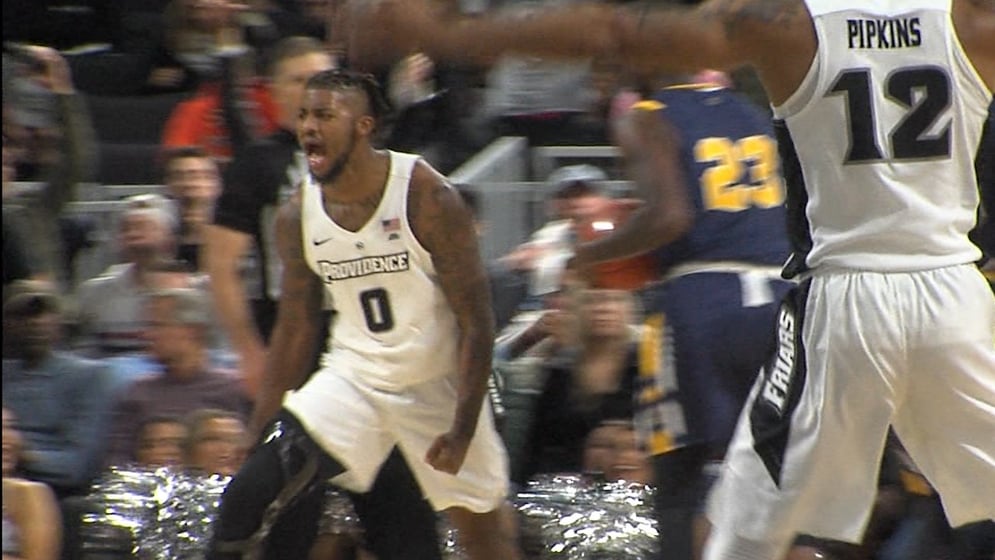 Six Friars scored in double figures for the second times this season as the Providence College men's basketball team defeated the Merrimack Warriors, 93-56, on Tuesday, November 19 at the Dunkin' Donuts Center in Providence, R.I. The Friars improve to 4-0 at home, 4-1 overall. Merrimack drops to 3-3 on the season.

Led by Luwane Pipkins' (Chicago, Ill.) game-high 18 points, eight assists and four rebounds. Maliek White (Richmond, Va.) chipped in with 15 points, including 3-5 from deep and four assists. In his first appearance of the season, Nate Watson scored 14 points on 6-7 shooting in just 14 minutes of play. Kalif Young (Ontario, Canada) scored 13 points on 4-6 shooting and 4-4 from the line to go with six rebounds. Emmitt Holt (Rochester, N.Y.) recorded his first double-double of the season and first since December 23, 2016 with 11 points and 10 boards. David Duke (Providence, R.I.) provided an all-around performance with 10 points, five rebounds, five assists and three steals.

"The first 10 minutes was not what we wanted," Friar Head Coach Ed Cooley said. "Alpha's been sick, so I was encouraged by the leadership from Emmitt, Luwane and Nate. We were able to make the game athletic and force a lot of turnovers."

Providence struggled to find the bottom of the basket at the jump, converting on 2-11 from the field, 0-4 from three-point land entering the second media timeout. Duke hit both buckets with a pull-up baseline jump shot and left block lay-up. Duke's lay-up brought the Friars back to within single digits, after falling behind, 14-4.

Watson provided a much-needed spark off the bench in his first appearance of the season, rattling off six straight points for Providence. Watson's six points began a pivotal 14-2 to give Providence their first lead of the game (23-22) with 5:14 remaining in the first half. The Friars lockdown defense held the Warriors scoreless for over four minutes.

"I was playing hard and calling for the ball like I usually do," Watson said. "It felt great to be on the court, playing in front of these fans and playing for Coach again."

After trailing by as many as 12, Providence entered the break hitting four out of their last five field goals and with the lead, 38-33. Holt contributed seven of the 18 first half bench points, four rebounds and a +17 rating for Providence in 10 minutes. Pipkins led all scorers with 11 first half points on 4-7 shooting, three rebounds and two assists.

"We have to play to our identity," Pipkins said. "Once we did that we picked up the pace. It felt good to have some shots fall and for me to be able to help the team."

The Friars came out of the half red-hot, hitting 10 of their first 11 shots. Three thunderous dunks in straight possessions from Young, Holt and Duke opened the half.

A free throw by A.J. Reeves (Roxbury, Mass.) at 15:18 in the second half gave Providence their first double-digit lead of the game, 50-40 and sparked a 20-1 run. The Friars held the Warriors without a field goal for just under six minutes and opened up a 69-41 lead.

Providence concludes their three-game home-stand on Saturday, November 23 at 4:00 p.m. against the Penn Quakers on FS2. The Friars then head to Anaheim, Calif. for the Wooden Legacy. They will take on the Long Beach State 49ers at 2:00 p.m. ET on Thursday, Nov. 28 in the first round of the tournament. The game will be broadcast live on ESPNU.