Rhody Drops A-10 Opener to Richmond at Home

Rhode Island dropped its Atlantic 10 opener, falling to Richmond, 69-61, Sunday afternoon. After opening the game with a 9-2 spurt, Rhode Island went cold over the final 15 minutes of the first half. After a Jermaine Harris 3-pointer at the 14:25 mark put
Sunday, January 5th 2020, 6:59 PM EST by Ian Steele 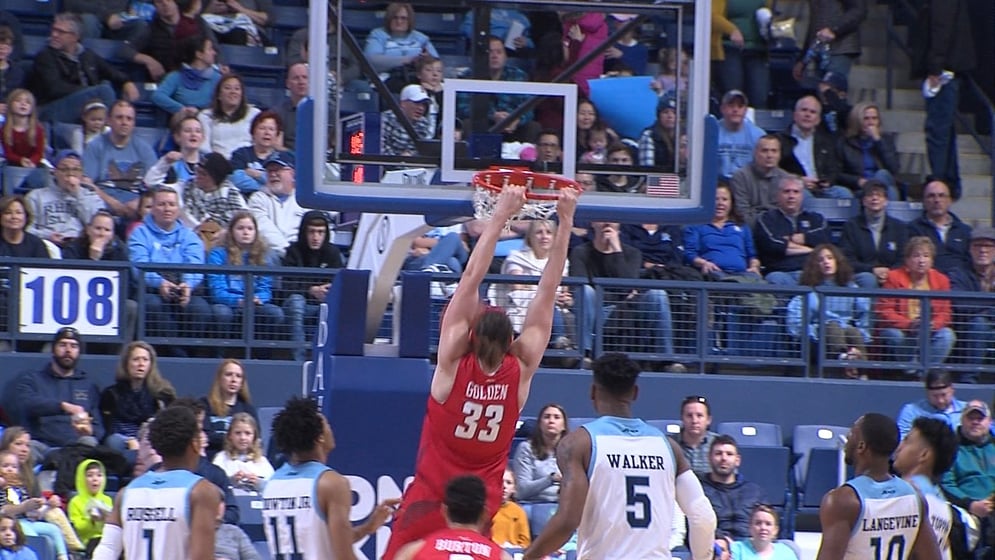 After opening the game with a 9-2 spurt, Rhode Island went cold over the final 15 minutes of the first half. After a Jermaine Harris 3-pointer at the 14:25 mark put Rhody ahead by seven points, Richmond outscored the Rams 28-10 for the rest of the half. The Rams were just 4-of-21 from the field after Harris' make, allowing the Spiders to go into halftime with an 11-point lead at 30-19.

Using a balanced offense, Richmond maintained a double-digit lead for most of the second half. Nathan Cayo led the Spiders with 19 points, while Nick Sherod (13), Blake Francis (13) and Grant Golden (10) all scored in double figures. Rhody managed to trim the deficit to eight points on a couple occasions, but it never truly threatened the lead.

It marks the first time this season Rhode Island has lost consecutive games.

Inside the Box Score

Sophomore Tyrese Martin recorded 17 points and 12 rebounds for his first double-double of the season and second of his career. Martin nearly achieved in the feat in the first half, where he had eight points and 10 boards. The 12 rebounds matched Martin's career high.
Senior Cyril Langevine finished the day with seven points, 11 rebounds, three blocks, one assist and one steal. His sixth rebound of the afternoon was the 800th of his career, making him just the sixth player in program history to record 800 or more boards.
Atlantic 10 leading scorer Fatts Russell was limited to just three points on 1-of-12 shooting from the field. The junior added four assists, three rebounds, two steals and one block.
Freshman Jacob Toppin was 5-for-7 from the field and 2-for-2 from the line, finishing the day with 12 points, eight rebounds, one block and one assist.
Senior Jeff Dowtin finished with 13 points, four rebounds, two assists and one block.
Sophomore Jermaine Harris scored nine points and grabbed four rebounds.
Both teams had just nine turnovers.
Up Next
The Rams are back in action on Wednesday night, when they host Davidson at 7 p.m. The game will be televised nationally on CBS Sports Network.