Chafee is expected to make an official announcement at the National Press Club in Washington D.C. on Wednesday.

Caswell Cooke, on the Westerly Town Council, was picked as the campaign treasurer.

"He's the type of guy that's been very involved and has been able to do things for every community in our town," Cooke said.

Cooke is no stranger to a presidential campaign. He was involved in 2016 when Chafee launched his first White House bid.

"Take Chafee seriously," Cooke said. "He is the only guy running as the Mayor, Governor, United States Senator, and the only Independent to win Governor in our state." 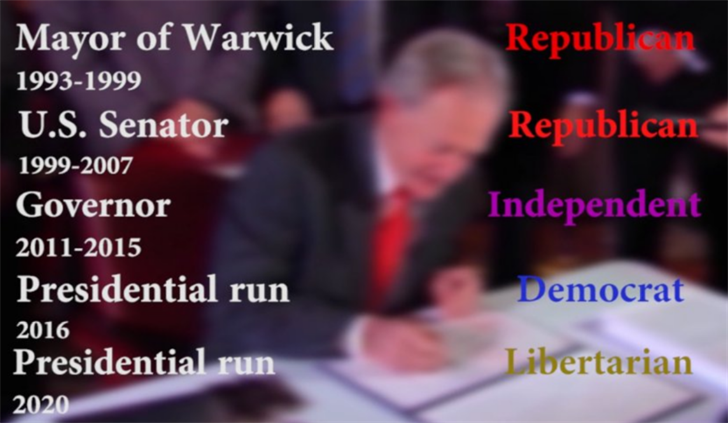 Chafee's shifts among political parties have some skeptical.

He served as Mayor of Warwick and then became a U.S. Senator. He left the Republican party to run for Governor as an independent, and won that race, serving for four years. Then in 2016, he launched a failed presidential campaign as a Democratic candidate. Now, Chafee is running for president again but as a Libertarian.

"I have to be honest, I chucked," Joseph Cammarano, a political science professor at Providence College, said. "He's the Don Quixote of American politics right now."

Cammarano says the Libertarian Party has a platform that is contrary to many of Chafee's positions.

"For example, gun control and the tax system," Cammarano said. "Whether it should be progressive or not. He's in favor of those. The Libertarian party has a clear stance against them.

Chafee's treasurer had this to say to the doubters:

"Whether you malign him, or love him, you can't say he's not the guy he's always been," Cooke said. "He's always been a guy that's fiscally conservative, yet socially progressive."

There will be a national convention in Austin, Texas from May 21st to the 25th where delegates of the Libertarian Party will elect their presidential nominee.

According to the Federal Election Commission, about 50 people have already filed paperwork to run for president as a Libertarian.