Russell Scores 26 Off the Bench, Rhody Gets First Conference Win

Fatts Russell's 26-point night led Rhode Island to a 69-58 win over Davidson Wednesday at the Ryan Center. As a team, the Rams' 58 points allowed marked the second-best defensive showing of the season. In a back-and-forth first half where neither team led
Wednesday, January 8th 2020, 11:35 PM EST by Rachael Perry 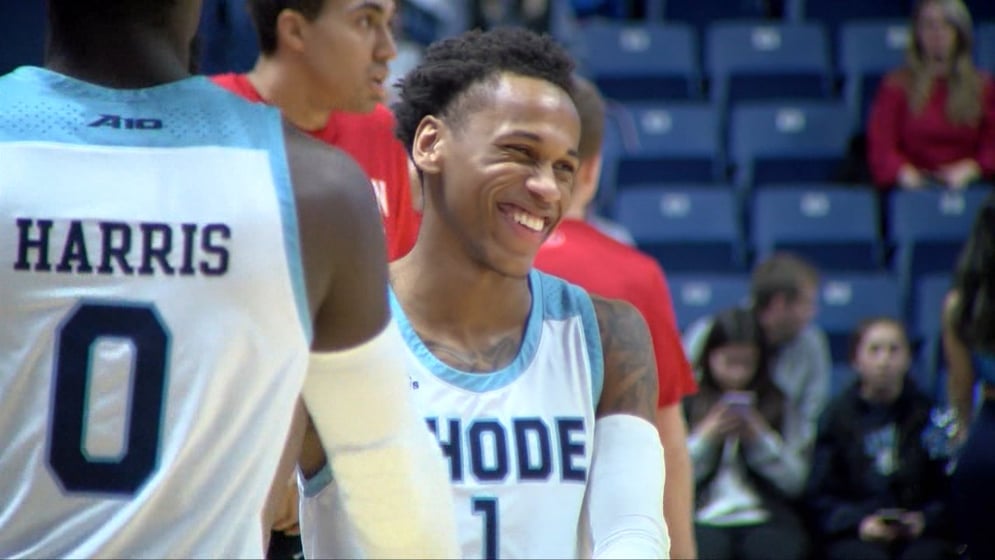 Fatts Russell's 26-point night led Rhode Island to a 69-58 win over Davidson Wednesday at the Ryan Center. As a team, the Rams' 58 points allowed marked the second-best defensive showing of the season.

In a back-and-forth first half where neither team led by more than five points, Rhode Island took the lead for good after a pair of Jermaine Harris free throws put the Rams up 21-20 with 6:07 on the clock. Davidson later tied the score at 29-29 but Fatts Russell used a make from the perimeter to cap a 5-1 Rhody push that sent the Rams into the break leading 34-30.

Through the first 20 minutes of play, URI committed just four turnovers and prevented the Wildcats from scoring after any of those miscues. The Rams had a 13-0 advantage in points off turnovers in the first half.

Rhode Island played with a lead for the remainder of the game. Davidson cut it to three (38-35) on a Bates Jones 3-ball early in the second half, but Rhody slowly rebuilt its lead and went up by double figures for the first time on a 3-pointer by Russell that made it a 56-46 game with 6:12 left to play.

A 12-6 Wildcats' run cut Rhody's lead to four (62-58) with 50 seconds remaining, but that was as close as it would get as Tyrese Martin and Jeff Dowtin both went 2-for-2 from the line and Russell sank a deep trey at the buzzer to seal the victory.

Inside the Box Score

Junior Fatts Russell turned in his ninth 20-point performance of the season, finishing with a game-high 26 points. He also added four rebounds, four assists, two steals and one block.
Making his first career start against the Wildcats, freshman Jacob Toppin recorded nine points, four rebounds and one steal.
Senior Cyril Langevine narrowly missed his fourth double-double of the season as he registered nine points and nine rebounds with two blocked shots.
Senior Jeff Dowtin also scored nine points for the Rams, in addition to recording five assists and three rebounds. Dowtin's second assist of the night moved him into fourth all-time on Rhody's career assists list. He now has 424 for his career.
Freshman Mekhi Long provided a spark off the bench, chipping in five points, three rebounds and two steals in 11 minutes on the floor.
Up Next
Rhode Island is back in action Saturday at VCU. The game, which will be televised nationally on CBS Sports Network, will tip off at 2 p.m.