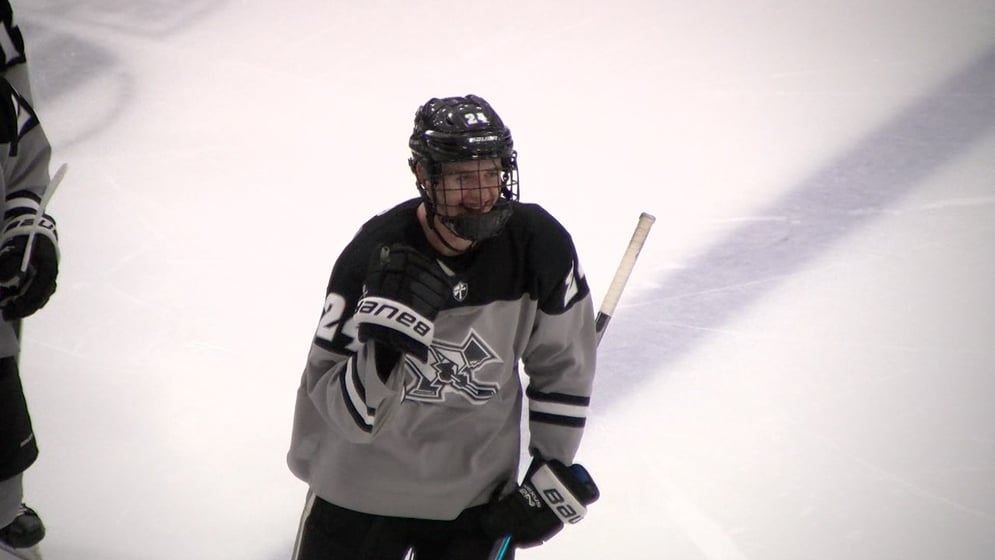 The No. 12 Providence College men's hockey team defeated the UConn Huskies, 2-1, on Saturday, Jan. 11 at Schneider Arena. Sophomore Tyce Thompson led the Friars offensively with two assists. Freshman defenseman Max Crozier registered what proved to be the winning goal just 48 seconds into the third period. The Friars' other goal was scored by Patrick Moynihan at 5:37 of the first period on a power play. Rusian Iskhakov netted the lone goal for the Huskies during a power play at 7:50 of the first period.

NOTES
- The teams traded power play goals early in the first period. The Friars struck first for the 21st time in 23 games this season.
- Patrick Moynihan put the Friars up 1-0 at the 5:37 mark with a tip from the slot. Tyce Thompson and Michael Callahan each picked up their 17th assist of the season on the play.
- Of Moynihan's eight goals this season, seven have come on the power play.
- UConn responded at the 7:50 mark, as Ruslan Iskhakov blasted home a one timer.
- The Huskies led 11-6 in shots after the opening 20 minutes.
- The Friars outshot the Huskies 12-10 in the middle stanza. Providence had a flurry of opportunities on a power play chance early in the period, but Tomas Vomacka made five saves to keep the game even.
- Max Crozier broke the stalemate just 48 seconds into the third period. He poked home a rebound off of Thompson's shot for his third goal of the season.
- Providence had to kill off nearly four-straight minutes of Husky power play time late in the third. The Friars limited UConn to just one shot on goal during the advantages.
- Michael Lackey finished the game with 27 saves and earned his 13th win of the season.
- Thompson extended his point streak to five games with two assists in the game. He pushed his season point total to 35 and remains second in the NCAA in total points.
-Thompson recorded his 13th multiple-point game of the season.

UP NEXT
The Friars host the University of New Hampshire next Friday night (Jan. 17). Puck drop is set for 7:00 p.m. at Schneider Arena. Providence then travels to the Whittemore Center for a 7:00 game with the Wildcats on Jan. 18.