Colonel Michael Winquist of the Cranston Police Department said a teacher from Cranston High School West found the gun at the bottom of a shallow part of the lake while teaching the aquaculture class. The teacher called police around 9:40 a.m.

Col. Winquist said the gun was rusted and covered in dirt, and authorities believe it had ben there for a while.

The gun is being processed by the Cranston Police Department to determine if it was stolen or involved in a crime. 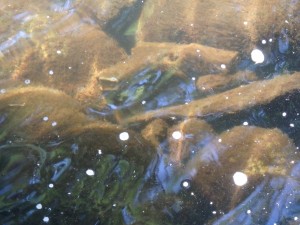 The gun pictured in the water/Courtesy Cranston Police Department

Pawtucket police confirm shooting in the area of Newell Avenue

Car crashes off of I-195 onto neighborhood street

Closed Catholic school to be converted to senior apartments

One dead in Providence shooting, City's first homicide of 2022