‘This is not what we bought into’: Seekonk residents upset over proposal for asphalt plant in neighborhood

SEEKONK, Mass. (WLNE) – Residents of a Seekonk neighborhood are up in arms about a proposal that would put an asphalt plant, for some families, right in their backyards.

The site is at 45 Industrial Circle, where a vacant building now stands that once was the Empire Collision Center. The property is in a section of town that’s already home to some companies, but residents say putting in an asphalt plant is harmful, and doesn’t belong there. 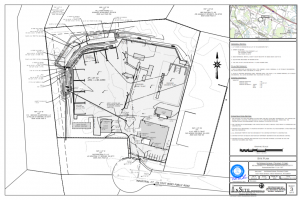 “We understand this person has a right to have a business, you just gotta find the right place for it,” said Ann-Marie Cardosi, whose property borders the potential site. “Light industry makes sense, (the industrial park) has been good neighbors. I cannot complain about the neighbors back there now. But it’s a big area of concern to change it so dramatically after you’ve got people who’ve invested so much of their life here.”

Cardosi is one of many neighbors pushing back against the plans. The asphalt plan, if it were to be approved by the state, would be in her backyard.

“Even though it is state of the art, it is still going to spew toxins.”

She’s lived in her home for ten years, and last November received a letter from the company informing her of the proposal. Six other neighbors also received the letter, she said, as their properties border the site.

Cardosi said the impacts of the plant reach father due to the potential environmental impacts.

“It’s two states, it’s four communities, five actually if you include East Providence which is down 100 Acre Cove. There are wetlands back there, we have a lot of wildlife in the area, and there’s a lot of concern. Noise is one thing, odor is horrendous, but most importantly, there are serious health issues that usually show up within six months of plants opening.”

Residents like Cardosi have been writing letters to the town asking for the matter to be continued so they have more time to learn more about the project, but, she said, two weeks ago, the proposal went before the planning board at a meeting and things started moving along. She said the board didn’t acknowledge the request of the residents.

“Things went really rapidly and the planning board approved it that night.”

Since then, the residents have banded together and created a Facebook group with more than 600 members as of Friday night. They’ve been making phone calls, sending letters to other residents to inform them of the proposal, and have been meeting on Zoom to discuss what their next move is.

Cardosi said the residents have even reached out to a lawyer.

“Forty-one years ago you put in the industrial plant, you had your zoning, and then you approved all these neighborhoods to build up surrounding it. Why would you change the type of business that’s in there now, and allow such an intrusive neighbor?”

One family in the neighborhood, she said, put their home up for sale over the matter, fearing what’s to come.

Cardosi, who is a retired nurse, said this is not what she had in mind when she moved her family to the neighborhood.

“There are little children living next door, a lot of us have grandchildren. This is not what we bought into. We came here for this. What you see is what we moved here for, and I really feel like it’s gonna be stolen from us if we allow this to happen.”

The proposal will now go before the Conservation Commission next month before it heads to the Massachusetts Department of Environmental Protection for approval.

ABC6 reached out to Insite Engineering Services for comment but did not hear back.

NBA unveils No. 6 patch to honor Bill Russell across league