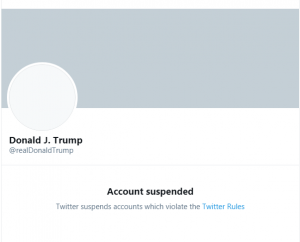 The social platform has been under growing pressure to take further action against Trump following Wednesday’s deadly insurrection at the U.S. Capitol. Twitter initially suspended Trump’s account for 12 hours after he posted a video that repeated false claims about election fraud and praised the rioters who stormed the Capitol.

Twitter’s move deprives Trump of a potent tool he has used to communicate directly with the American people for more than a decade.