Detectives executed a search warrant as part of a drug investigation at a home on Buffinton St. in Fall River at around noon on Friday.

During the search detectives found an illegal handgun, belonging to 27-year-old David Verdieu, who didn’t have a license to own have the weapon. 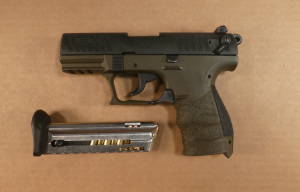 Verdieu was charged with the following:

Howe is being charged with the following: