The department says a ‘No Knock’ warrant was used due to the presence of firearms and potential gang members in the building.

According to the department, ESU made entry into the apartment and located and secured four males in four separate bedrooms before a search commenced.

In one bedroom, Detectives found a black Taurus Armas G2C 9MM Pistol inside a duffle bag, which belonged to 21-year-old Caine Hamilton who was in the room.

The gun was loaded with 11 rounds of ammunition in addition to one round in the chamber.

In another bedroom, police found a black Ruger SR40C 40 caliber pistol under the mattress of 19-year-old Jurvonta Decuire.

Police say this gun was loaded with 14 rounds of ammunition in addition to one round in the chamber. 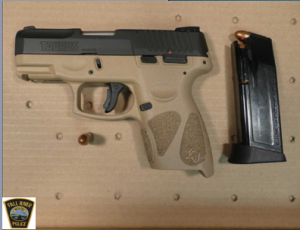 Gun located in the room of Caine Hamilton 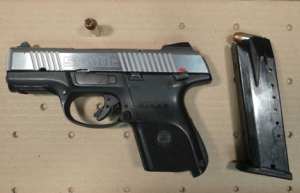 Neither Hamilton nor Decuire are licensed to carry in Massachusetts and both were arrested on charges of: