Sunday brought pleasant conditions with warm temperatures and a bit of humidity, but nothing extreme.  We did have a bit of visible wildfire smoke in the sky from the western US wildfires, but air quality at ground level has remained relatively good. 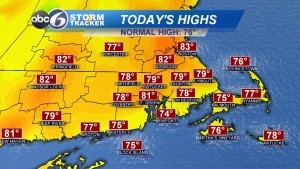 We’ll turn unsettled Sunday night as a frontal boundary approaches.  That front touches off a few showers and thunderstorms, with most of the stronger storm activity focused north of our area.  We’ll continue to see occasional shower chances with lots of breaks in the action through mid/late week. 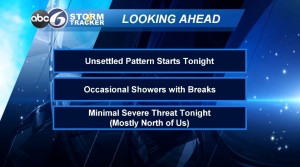 The threat for severe thunderstorms is mostly north and west of our area, but look for showers and a chance of thunder Sunday night into Monday morning.  A few storms could produce heavy rain and gusty winds, with the best chance of showers and thunderstorms in northern areas. 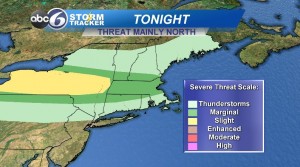 We’ll clear out those hit or miss showers and storms early Monday morning, with sunshine in store for most of the day.  The weather looks like it will cooperate for late-season beach plans.  Although waves have been getting smaller, we still have moderate sized waves and a moderate risk of rip currents for Monday.  And a reminder: lifeguards are no longer on duty. 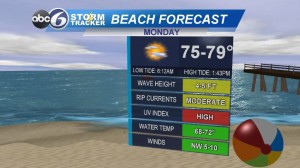 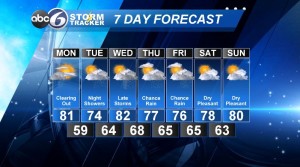