URI Ship at Sea During Pandemic Finally Makes it Home

NARRAGANSETT, R.I. (WLNE) –  URI ship, Endeavor returned to its homeport at the Narragansett Bay Campus after a 40-day expedition in the middle of the coronavirus pandemic.

URI oceanographers, Rainer Lohmann and Rob Pockalny flew to Barbados in February to board the Endeavor for the beginning of a 22-day expedition across the Atlantic.

At the time, their only health concern was whether they needed vaccination for yellow fever.

As both monitored the news, they began to worry.

“We heard about the virus situation in northern Italy and then Spain, and then Trump issued the travel ban and URI canceled classes,” Lohmann said. “That’s when we realized that things were really in bad shape, and our anxiety started to rise about how we were going to get home.”

Lohmann continued to say, “when we left, everything was normal, and then we read about toilet paper hoarding and pasta flying off shelves. It was like being in a strange film; you don’t know if it’s real.”

The scientists were able to complete their research despite what was going on around the world.

They collected sediment samples at 10 locations across the Atlantic in an effort to establish an age for the black carbon found on the seafloor. 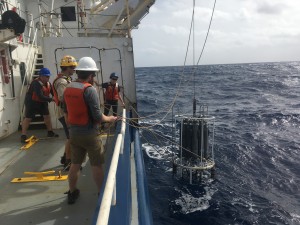 Endeavor scientists and crew peer overboard as they await the retrieval of an oceanographic instrument from the seafloor. (photos courtesy of Rainer Lohmann)

The scientists are looking to determine whether any of the black carbon could be traced to recent African wildfires.

But, as the research team arrived in Cape Verde on March 13 – one day before the harbor was closed to call incoming ships, all flights home were canceled.

“To keep the ship free of the virus, the decision was made that if anyone got off the ship in Cape Verde, they weren’t going to be allowed back on,” Lohmann said. “Two health officials came on board to take our temperature, and then they ran off. It was very surreal.”

With no other options, the university researchers – including graduate student Sam Katz, had to remain onboard the ship, which departed Cape Verde the next day.

The ship headed for its homeport at URI’s Narragansett Bay Campus instead of going to Florida as originally planned.

“The ship’s officers took our temperature every day and logged them in so we could use the transit home as our official quarantine time,” Lohmann said. “With 21 people on board, we knew we were breaking the rules of social distancing, but we knew we were clean since no one got on in Cape Verde.”

Katz said he was planning on staying on the ship back to Florida to prepare the samples, so his schedule was not disrupted much at all.

“It was a nice cruise home, and we got some work done. The ship took a detour and sat offshore for a day to fulfill the 14-day quarantine period”, said Katz.

The ship arrived at the dock was met with customs officials checking passports while wearing masks and gloves.

“We didn’t want anyone to come aboard that could potentially contaminate the ship, so we unloaded everything ourselves,” Lohmann said.

“We knew we were virus-free when we left the ship, but as soon as we met someone on land, we weren’t so sure anymore,” he added.

Christopher Armanetti, who filled in last minute as the ship’s captain for the first time, noted the significance of the 40-day expedition.

“Chris had a saying that you’ll never forget your first time as captain,” Lohmann said, “and we all agreed he would never forget this one. Nor will the rest of us.” 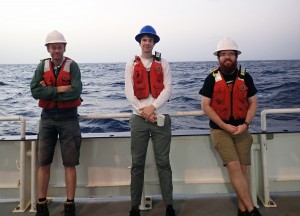 China: Balloon over US skies is for research, wind pushed it

US adds a surprisingly strong 517,000 jobs despite Fed hikes