“There is literally not another dose in the state that they can be pushing out at the end of each week,” Thomas McCarthy, Executive Director of RIDOH COVID Response said.

McCarthy says right now, the demand is more than supply, but that’s expected to change. The Vaccine Subcommittee met Tuesday morning, laying out their plan for the future of the state’s roll-out plan.

Tuning into the vaccine subcommittee meeting this morning! Here's the most updated timeline of vaccine rollout. @ABC6

“The beginning of June, mid-June, we should be receiving about 100,000 doses a week in the state,” McCarthy said. “At that point, we should also be reaching 70% both doses, fully vaccinated. So, I think probably end of June, maybe July, is when we’ll start to see more supply than demand.”

Until then, the state is expected to open eligibility at a faster timeline then expected because of more supply. 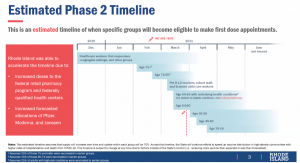 The new phase 2 timeline opens eligibility to people 50 to 59 by April 5th and people 40 to 49 by April 12th. The state is planning on still sticking to its original goal of opening up vaccinations to all Rhode Islanders 16+ by April 19th.

“We’re keeping our eye on the ball of keeping people out of the hospital and keeping them alive through the vaccination,” Dr. Nicole Alexander-Scott said.

The state also added new zip codes to the mix. As of 9:00 a.m., anyone 16 and older in these 8 zip-codes can make an appointment:

The Vaccine Subcommittee says they also plan to add in more “Tier 2 zip-codes” in the next two weeks, targeting 16 high-density communities in total.

“We don’t have an exact date for that rollout; we just started our initial conversations with the leaders of those communities.” 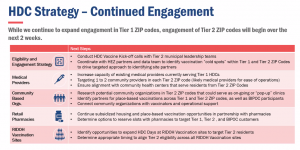 However, even when eligibility opens to the public, state officials warn it may be tough to get an appointment.