SATURDAY 8:00PM UPDATE: Henri is now officially a category 1 hurricane.  The storm, currently over the Atlantic ocean off of North Carolina, has sustained winds of 75 miles per hour, gusting to 90 miles per hour.  The storm is moving over open ocean water for the next 24+ hours before making landfall. 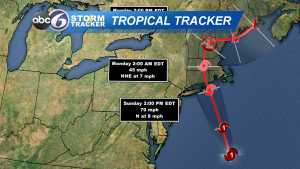 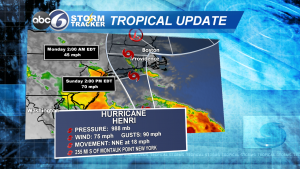 A slight eastward shift in the latest forecast cone means Hurricane Henri very much remains a concern for our area.  The center, or “eye” of the storm likely makes landfall along Long Island and the Connecticut coastline Sunday afternoon/evening, however the Rhode Island coastline is within the newest range of possible locations.  Regardless of actual landfall location, the effects of the storm are wide reaching.  Preparation for the impacts from Henri will need to remain a top concern.

Unlike other tropical systems that have impacted SNE, which move through very quickly, Henri will be moving slowly.  That means big rainfall totals will be expected on the western side of the storm, likely in western New England.  Meanwhile, extended periods of gusty winds are expected on the eastern side of the storm, which includes our area.  That increases the risk of power outages. With astronomical high tides also happening this weekend, coastal flooding and erosion will be concerning. 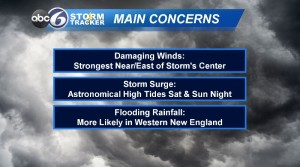 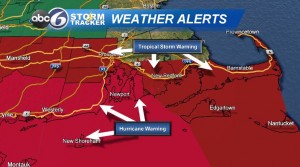 Your best bet is to prepare now for power outages and storm damage, rather than putting it off.  It’s always better to have supplies on hand, like batteries and non-perishable food, and end up not needing them; rather than need them and not have them.  Also, it’s a good idea to check generators, sump pumps, and take some pictures of your property for the worst case scenario.  Thankfully, the weather remains quiet for Saturday, so you’ll have that time to complete any last minute preparations. 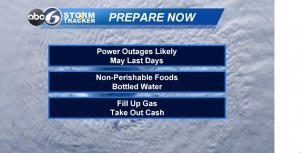 Stay with ABC6 News on air, online, and on social media through the weekend for updates.  Also, be sure to download the ABC6 News app so we can send news and weather alerts right to your phone.

Developer to announce groundbreaking for Cranston Topgolf in July

City of Taunton to increase security at local park

Rhode Island veterinarian's license under investigation after concerns from past surface