Today is mainly sunny but cold with highs only in the low to mid 20s. Overnight will be frigid with lows down into the single digits. Factor in even the lightest breeze and we feel much cooler. Thursday stays sunny and cold with highs in the mid to upper 20s.

Then we shift focus to the potential for a major winter storm late Friday through Saturday. Expect increasing clouds on Friday with highs in the mid to upper 30s. A few flurries around at times but any steady snow won’t arrive until late Friday night. We are still a few days out from Saturday so there is still some uncertainty in regards to the exact track of this storm, along with it’s intensity. That being said, regardless of the exact track, major impacts are likely here in Southern New England. Right now, prepare for any Saturday plans you may have to be altered and also be prepared to stay off the roads through the entire day on Saturday. Along with heavy snow through much of the day, very gusty winds will also be a concern.

Currently there are a few scenarios – one with a storm along the ‘benchmark’ which would bring the most snow to the area. Another potential outcome would be a storm that tracks a bit closer which would bring some mixing into play. Another potential outcome would be a storm farther out to sea…still close enough to bring significant snow, but the higher totals would be farther southeast. The track of the storm is going to be dependent on what we end up experiencing here. Narrowing down the track and expected snow totals will come in the next 24 hours. The potential for a foot or more is there for many. 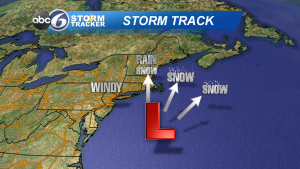 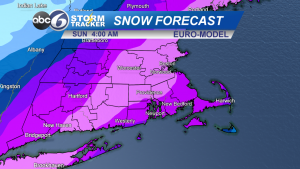 Snow gradually pulls away overnight Saturday into Sunday. Sunday will become sunny later in the day but it stays breezy with highs in the upper 20s.

Two taken to hospital after SUV plunges into water in Exeter

Narragansett Town Council to vote on beach fees on Monday

Man stabbed by group of juveniles in Providence, police say

Two sentenced to life in prison for 2019 Woonsocket murder