EAST PROVIDENCE, R.I. (WLNE) – Three people were arrested and charged Monday after a dog was found at an Auto Spa with a severe skin infection.

Kayla Card and William Pagliarini, of Johnston, allegedly left the dog at Sunset Auto Spa on Taunton Ave. in East Providence to be cared for by one of the employees, Scott Corbin, while the two were away.

Card and Pagliarini are accused of not providing adequate veterinary care and allowing the dog to suffer from a skin infection without proper treatment.

On August 25, a report came in to East Providence police of a dog in a kennel at the Auto Spa “not doing well.”

The pitbull mix, named Primo, was found coughing and appeared to be having difficulty breathing. Police say the temperature outside was 90 degrees.

This video shows when an animal control officer found Primo after receiving a report of a dog being left outside in a kennel at the auto spa. The caller said the dog was “not doing well” — you can see that in this footage. @ABC6 pic.twitter.com/clz1nfrOxb

Card, Pagliarini and Corbin are charged with the following: 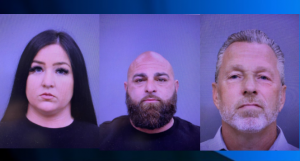